25% Of U.S. Net Users Have Both AVODs And SVODs... And AVODs Are Upping Their Content Game 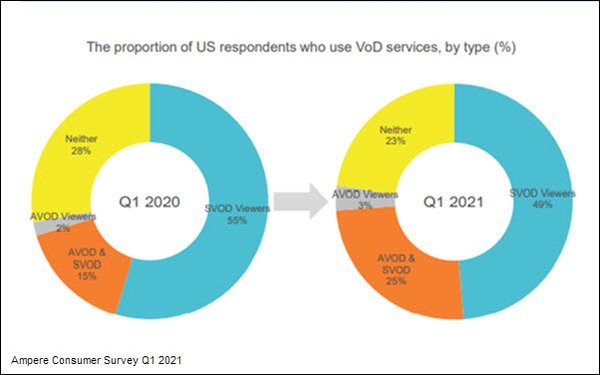 One-quarter of U.S. internet users reported using a mix of ad-supported video-on-demand (AVOD) and subscription video-on-demand (SVOD) services as of this year’s first quarter — up from 15% in Q1 2020, according to research from Ampere Analysis.

U.S. SVOD stacking levels reached an average of 4.4 per household, but viewers using SVODs without AVODs declined from 55% to 49%, while those using only AVODs edged up from 2% to 3% (chart above). 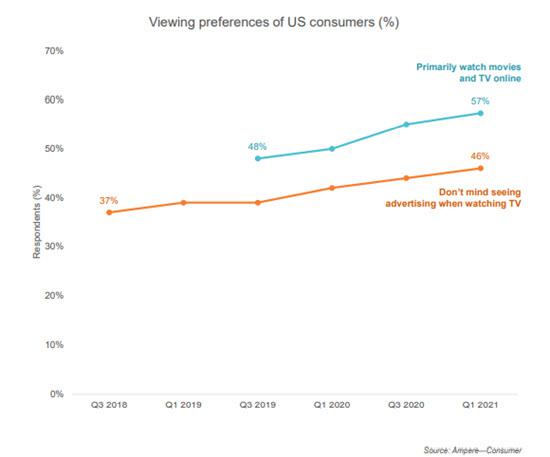 SVOD services’ subscriber numbers and retention rates are typically driven by the quality of their original content and exclusive titles, while AVODs’ have been driven by offering high volumes of non-exclusive content from major studios.

Co-existence of the models will no doubt continue, but the balance is shifting. It’s not hard to understand entertainment companies’ push to add AVODs or reduced-cost, ad-supported tiers to their SVODs.

Sheer growth potential — being able to woo both platforms’ dominant demographics — is one obvious reason.

AVOD viewers tend to be older and less affluent than their SVOD counterparts and tend not to stack multiple SVOD services, preferring traditional pay-TV packages, Ampere confirms. Its analysis finds older users (55 to 64) to be the fastest-growing age bracket among AVOD viewers, with a seven percentage-point increase in AVOD uptake among that group in the last year alone.

The older segment is also the fastest-growing for SVOD adoption — although, due to the greater maturity of the SVOD market, the segment’s growth rate was a more modest 3.5 percentage points last year. 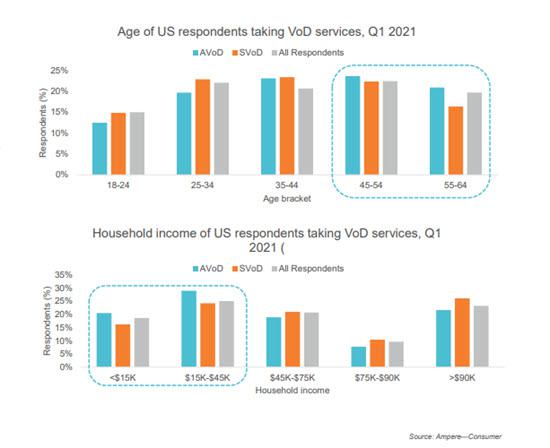 Plus, the Q1 decrease in respondents that watch neither SVOD nor AVOD (from 28% to 23% year-over-year) was primarily driven by older consumers transitioning to using online services for the first time — a trend accelerated by the pandemic, notes Ampere.

AVODs also pose growing competition and potential for paid-sub cannibalization. But for SVOD owners, viewers not up for paying premium rates (or limiting those expenses to one or two SVODs) are still prime prospects for building viewership for ad sales for an AVOD tier or separate service — and perhaps also candidates for paying modest per-month subscriber fees for limited-ads tiers.

For one thing, with time, consumers will become increasingly aware of overlap in the content between the two types of platforms.

However, Amazon Prime Video, NBCUniversal’s Peacock, and Hulu account for 86% of the overlap: 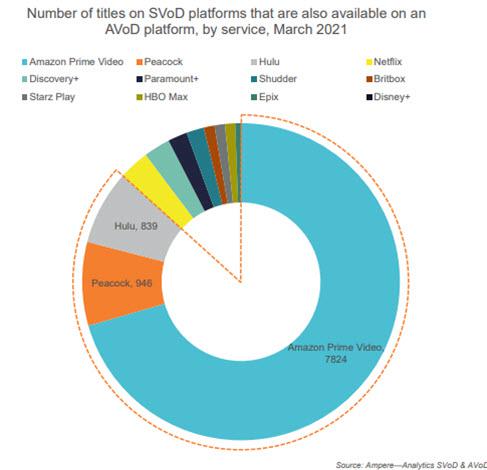 Prime Video has the greatest overlap with Fox-owned AVOD service Tubi, with 6,600 titles shared between the two — and more than 90% of these are “lower-value” movie content, according to the analysis. Peacock follows, with 715 titles on its paid tiers that are also available free on Tubi. Most of the 715 are also available via Peacock’s free AVOD tier.

Notably, AVODs are also starting to narrow the content-quality gap a bit by starting to invest in original content to differentiate their offerings and reduce reliance on licensed content.

“We can see [AVODs’] appeal with older audiences at present, but AVOD services will need to compete more directly with the content on SVOD if they want to attract the younger, more affluent audience already familiar with SVOD,” points out Ampere analyst Tom Bell.

Further, Ampere’s Q1 survey confirms that exclusive content is a factor for differentiating between AVOD platforms, as well SVODs. The two most popular AVOD services were Tubi (used by 43%) and Pluto TV (used by 37%), which also have the highest proportion of exclusive content.

“As studios are reserving an increasing proportion of their content for their own platforms, AVOD platforms are beginning to follow suit and commission their own originals,” says Bell.

“While content exclusivity remains a key difference in strategy between AVOD and SVOD platforms, these early moves into original commissioning bring AVOD players a step closer to increasing their catalog exclusivity and quality and differentiating themselves in a crowded market.”