Facebook, Ray-Ban Create Smart Glasses - But Will Consumers Buy Them? 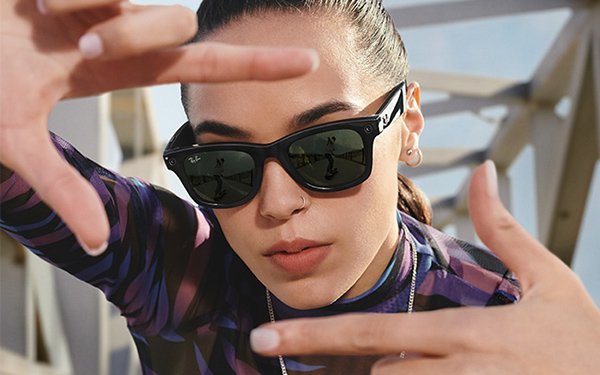 Will they become just another shiny object for advertisers or provide any type of data that can be captured to support future campaigns?

The product is called Ray-Ban Stories and will sell for a starting price of $299 at stores like LensCrafters, and Sunglasses Hut stores.

Neither company has offered insight into how advertisers can use these glasses to reach potential customers, or whether or not they plan to run a campaign to advertise this smartwear product.

The frames feature two front-facing cameras for capturing video and photos, and sync with an app called Facebook View, where users can edit clips and share to other apps on a smartphone.

“Hey Facebook, take a video” will trigger the voice control to use hands-free, and there is a physical button to push on the glasses for recording.

An LED light on the front of the glasses is turned on for privacy concerns when capturing photo or video. It’s “so people around you will know you’re taking a photo or video, and that’s more than what smartphones do,” Mark Zuckerberg, Facebook CEO, said announcing the release of the glasses.

And while these glasses have dual 5-megapixel cameras that can capture more than three dozen 30-second video clips or about 500 photos before the on-device memory fills up, the question remains whether or not consumers will buy them.

Technology companies like Google have tried to bring these kind of smart glasses to market, but not many sold in the consumer market to make it worth their time to keep the product alive. It’s unclear whether consumers really want them.

In the fall of 2013, Google launched a Glass referral program so consumers who owned them could invite three friends.

Assuming each consumer invited three friends, and they all accepted and purchased a device, that would be about 40,000. There are other numbers out there as well.