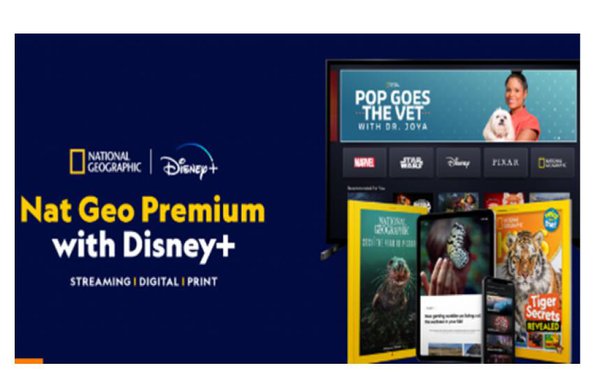 In the latest example of Disney’s push to grow Disney+ and its other brands and businesses via synergistic tie-ins, the company has debuted a novel bundle that pairs National Geographic content — including its print magazines — with subscriptions to the streaming service.

Those who opt for an annual ($109) or two-year ($190) term of the new National Geographic Premium with Disney+ subscription will, in addition to access to the full streaming service (which features a plethora of exclusive Nat Geo shows and documentaries), get 10 print issues of National Geographic magazine.

All bundle subscribers, including those opting for a monthly subscription priced at $10.99 per month, will also receive 10 print issues of Nat Geo Kids magazine (its combined June/July and Dec/Jan issues are excluded), a weekly newsletter featuring Nat Geo’s best stories, and Nat Geo’s annual “Year in Pictures” special print edition – plus access to natgeo.com, the Nat Geo app, and the brand’s full online archive.

The combination of Nat Geo — which is majority-owned by Disney — and Disney+ is meant to encourage people to use Nat Geo’s digital and print assets to “dive deeper” into topics covered in Nat Geo programming on the streamer, according to the companies.

“National Geographic Premium with Disney+ is the latest offering in our vision to ensure that anyone, at any time, on any platform, can have access to in-depth, comprehensive and fact-based storytelling through one seamless experience,” said Julie Galvin, vice president, marketing at National Geographic Media.

The original Disney bundle — Disney+, Hulu and ESPN — played a major part in driving Disney+’s phenomenal growth, and the company is clearly intent on employing the cross-platform concept as widely as possible.

Earlier this month, Disney launched another cross-property promotion, in which Disney+ subscribers who link those accounts to Disney theme park accounts can get Disney resort hotel-room discounts of up to 25% between July and September.