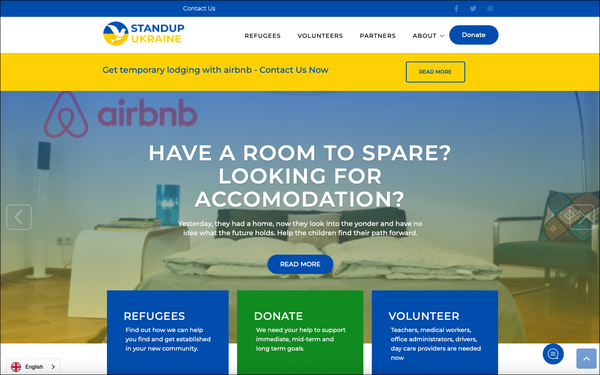 StandUP Ukraine, a collective of individuals, corporations and registered nonprofits, has launched local resources designed to connect displaced Ukrainian refugees with services during the war between Russia and Ukraine.

The platform launched with $750,000 of committed technology, goods and services from founding sponsors such as Amazon Web Services (AWS), housing support through Airbnb.org, global telecommunications services from enterprise telecom Sangoma, and a community platform for donors and volunteers by Countable, the community-as-a-service platform.

“Once it became clear Russia would invade Ukraine, many companies wanted to support efforts to provide the Ukrainian people with services,” said Jory Des Jardins, CMO of Countable, an audience and community engagement platform.

Powered by Countable, StandUP Ukraine’s platform is based on community engagement that brings together refugees, donors, sponsors and suppliers by matching requirements with resources. This online marketplace with resources includes communication, education, employment, healthcare and other relevant local services for refugees.

European companies were not really ready to serve and support refugees.

“They would throw waves of support to those in need without any direction,” she said. “Food and clothing were turned away, because there weren’t any refugees in that area.”

Countable works with AWS, Airbnb, Twilio, ViewSonic, among others. Some are in Canada such as Sangoma, and others in Europe such as Drunken Horse Gin.

Companies have stepped up to support efforts. AWS, for example, donated cloud service credits. Airbnb, donated rooms for up to two weeks for refugees. Sangoma donated mobile phones because so many lost their cell service.

The partnership was developed by Women for Causes, a global group of female leaders who presented StandUP Ukraine to an all-female coalition of Parliamentarians at the Council of Europe, known as PACE, where it was swiftly endorsed. The program was designed to make it possible for brands around the world to quickly and confidently get services to those in need.

The Council of Europe supporting the partnership was key to get it off the ground, but support from corporations, non-profit groups, and individuals needed coordination.

Des Jardins is not a stranger to supporting causes and spearheading change. She founded BlogHer in 2005, with Elisa Camahort Page and Lisa Stone.

The group makes it possible to enable major companies to donate services, but any company -- including single proprietors through Talon.one -- which provides gifts through credits.

“Companies want to engage their employees around advocacy,” she said. “It’s been interesting around Roe V. Wade. Companies don’t want to take a political stance, but they want to help their employees.”