Netflix: Analysts' Views Improve, And It's Now Forecast To Remain #1 In Global Subs 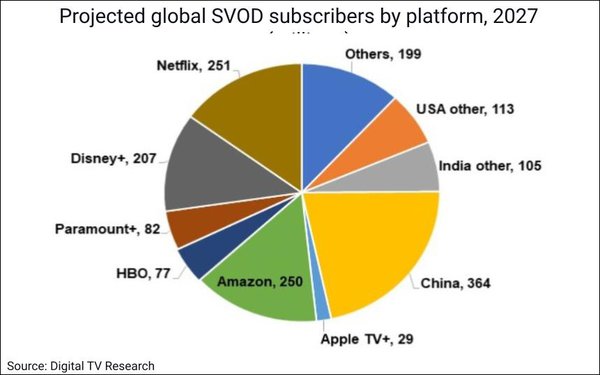 After seeing its stock price plummet 60% following two quarters of reported subscriber losses, things may be looking up for Netflix.

Following its July announcement that it will launch an ad-supported tier, and its decision to move that launch up to November instead of waiting until Q1 2023, several analysts have upgraded their assessments of the stock.

Still, fewer than a third of analysts currently have a “buy” rating on Netflix, and more than half have a hold rating on it, per BW counts.

Meanwhile, Digital TV Research (DTVR), which forecast that Disney+ would overtake Netflix in global subscriptions by 2027, with 274 million to 253 million, is now forecasting that Netflix will retain its No. 1 position.

However, while accelerating subscriber growth is the primary reason for Netflix introducing a lower-priced service tier, DTVR said it upped its forecast based more on reduced sub expectations for Disney+ than improved ones for Netflix.

Disney itself adjusted its Disney+ subscription growth projections based on the lost soccer league exclusive, from 230 million to 260 million by 2024 to between 215 million and 245 million.

DTVR also forecasts that Netflix will remain No. 1 in subscription-based video-on-demand (SVOD) revenue, with a projected $30 billion by 2027 — roughly the same as the combined revenue forecasts for  HBO Max, Paramount+ and Disney+ combined.

Despite reducing its subscription growth forecast, DTVR has kept its 2027 SVOD revenue forecast for Disney+ at $15 billion. The platform’s average revenue per user/ARPU and revenue “will increase in key markets after the platform introduces its hybrid AVOD/SVOD tier and the more expensive SVOD-only tier,” says Murray.

Overall global SVOD revenue is projected to reach $132 billion by 2027.

Total global SVOD subscriptions are projected to increase by 475 million between 2021 and 2027, to reach 1.68 billion, with six U.S. platforms accounting for 47% of the total (chart above).