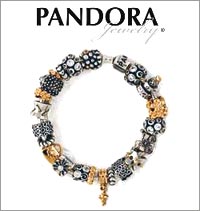 The three-time medalist and U.S. team captain will be featured in the brand’s 2013 print campaign and will make select appearances at several Pandora stores during and following the Kellogg's Tour of Gymnastics Champions.

"When we think about Pandora, we instantly begin to think about the women who inspire and encourage us," said Angel Ilagan, vice president, marketing, Pandora Jewelry North America, in a release."It goes without saying that this past summer, Aly was among the many women who moved us all, men and women, and inspired others to celebrate the qualities that make us unique.”

Her first public Pandora appearance will be on Oct. 6 from 11 a.m. to 1 p.m. at the Pandora store in Stonebriar Centre Mall in Frisco, Texas. Future events will include appearances in the St. Louis, Philadelphia, Boston, Chicago and Atlanta markets.

At these events, Raisman will select charms that show her unforgettable moments of 2012, showcase her personal style and include sentimental reminders of her friends, family and favorite hobbies. She also will greet fans, take photos and sign autographs.

"I'm excited to join a brand that inspires women to celebrate who they are and what makes them unique," Raisman said in a release. "From my mom to the 1996 Women's Gymnastics Team and many more, there have been so many positive women who helped me realize and achieve my dreams. With fashion being a huge interest and passion of mine, I am excited to work with Pandora and bring some new perspective from the gymnastics world."

In addition to the 2013 print campaign and 2012-13 in-store appearances, Aly (@Aly_Raisman or Facebook.com/AlyRaisman) will also actively contribute to Pandora's social media efforts (@PANDORA_NA or Facebook.com/PANDORA).