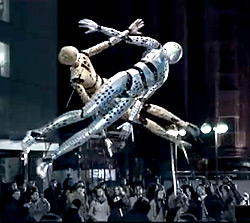 Lexus has never had a global advertising campaign -- but that's okay because for years the Toyota Motor luxury brand, born in the U.S., was promoted in the U.S. But now the automaker markets Lexus in 70-plus markets around the world. And a global luxury brand, more than a mass-market brand, needs global consistency in messaging and positioning. Affluent people do a lot of traveling, after all.

The new effort, which is by London-based agency Chi & Partners -- tapped for the project after a global review -- uses handcrafted art as a metaphor for a Lexus brand equity around craftsmanship and engineering.

"Amazing in Motion" furthers a somewhat new tack Lexus has taken: aligning with design and people, and less of a strict focus on feats of automotive engineering and micrometer-tight fit and finish. The film, photography, and design campaign comprises global events handled region by region, and a series of global TV spots that have no voiceover and very little in the way of text -- meaning no translation required.

The first spot, shot in Spain, shows an 11-foot-tall aluminum puppet wandering sadly through a city at night with the help of black-shrouded human puppeteers. He sees a female puppet and the pair begin an airborne pas de deux. A connection to Lexus, elaborated in longer online videos, is that the puppets are built with high-tech 3D printing and with materials that Lexus uses in its vehicles: bamboo, walnut, carbon fiber, machined aluminum, and exterior paint, among other things.

"It was all basically created under the notion of 'don't just say it, do it,'" says Brian Bolain, Lexus corporate marketing manager. "The idea was to create a spectacle."

Lexus, as part of the global effort, launched the Lexus Design Awards in New York in March with an event featuring actress Kristin Chenoweth, The Roots and Questlove. The campaign will include other such experiential elements, including boutiques called "Intersect by Lexus" in cities like Tokyo, New York, Dubai and Milan. There is also a twice-yearly design magazine called "Beyond by Lexus," also on Lexus-Int.com; and a short-film series.

Bolain says Lexus global staff (in Nagoya, Japan) came up with the idea, but that the global marketing group is of international makeup so it was kind of a community effort. "The office is staffed by a mixture of Japanese and expats, so it's an international group," he says. "In the U.S., we have had a head start with 23 years to hone the brand, but there are various other markets that are also important from a volume perspective; there really hadn't been a concerted [global] effort."