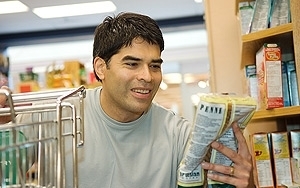 Goodbye, macho; hello, mensch. A new kind of guy is emerging -- one who does the shopping, and not just for beer, chips and maybe a carrot if bothered to buy it. Defy Media’s second annual Acumen Report: Brand New Man, tapping something over 2,000 men ages 18-49, suggests that men are becoming household helpers, perhaps as they are supplanted at work by women -- a big change from household engagement meaning coming home for dinner now and then.

The study shows that men, as they become more involved with household duties, are also becoming more involved in shopping and brand choices. In the study, based on an online panel performed by Hunter Qualitative Research, more than 65% of respondents said they now hold primary shopping responsibility for several household product categories, with 67% saying they enjoy shopping for the household, and close to 63% open to choosing new brands.

About 54% of surveyed men said they shop for groceries and household supplies more often than their spouses, with many saying they are the decision makers when it comes to grocery shopping as well. Fifty percent said their spouses do not tell them what brands to buy, and nearly 70% said they are willing to sacrifice career advancement for more time with family. “Part of being a man is taking care of family and those around you” was averred by over 90% of the panel.

Said Andy Tu, EVP of marketing for Defy Media: “We found that men are not only purchasing in greater numbers, but in many cases they are the ones actually making the brand decisions. They get their cues from a variety of sources, but friends and family still wield the most influence with digital connections coming in close behind, especially with the younger generation."

About 40% of men noted they became aware of a new brand from advertising; and about 24% said they were apprised about a brand from a YouTube video, and about 28% from social media.

They are also eschewing the stereotype of the guy who won’t ask directions: the study shows that more will seek advice with an average 32% asking store employees for guidance and nearly half  turning to friends or family.

About a quarter of respondents got information via a mobile device while on site at the store, 31% read online reviews and about 26% watched a video on YouTube during the research process. About 26% of men 18-34 reported using online reviews to research a new brand compared to their 35-49-year-old counterparts at just 21%.

About half of respondents said they make purchases based on the brand’s story or history and over half because it was made locally. Close to 57% said they would stop buying from a company that did something offensive or illegal.

“The idea that men are mindless, robotic, or powerless in their decisions about shopping and brand decisions is antiquated,” said Tu.