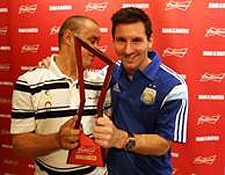 Marketing efforts around the 2014 FIFA World Cup Brazil are in full swing.

The FIFA Man Of The Match, presented by Budweiser, is seeing a record turnout of fan voting across the world with multiple games already exceeding the total vote count from the 2010 FIFA World Cup South Africa Final.

With fan voting more accessible than ever -- across FIFA.com, the official FIFA World Cup app, and via Twitter -- through only 14 games of this year’s tournament, cumulative voting has already surpassed more than 1 million total fan votes.

In addition, Budweiser is giving a few select fans from around the world who embody the selfless spirit of the “Rise As One” campaign and have given back to the game of football in many ways a once-in-a-lifetime opportunity to present the FIFA Man Of The Match, presented by Budweiser, trophy to select winners.

On the insurance front, Allstate has found a unique way to tie its “Mayhem” character to the soccer games.

For the past four years, Allstate’s Mala Suerte (the Spanish version of “Mayhem”) has personified the bad luck that can come with not having the right protection. Now, with the World Cup as stage, the new @SoyLaMalaSuerte Twitter handle is providing devoted soccer fans with the opportunity to send bad luck to rival teams competing in this summer’s biggest matches.

From kickoff to the final whistle, fans following @SoyLaMalaSuerte can take to Twitter as matches unfold and using #EnviaMalaSuerte suggest which teams they would like to see fall to Mala Suerte’s antics. Through spontaneous appearances, @SoyLaMalaSuerte is taking ownership of bad moment events in real-time, like Brazil and Bosnia's autogoals, twitting to the delight and frustration of fans and followers.

“When compared with other professional sports, soccer is number one among Hispanic Americans,” said Georgina Flores, Allstate vice president, integrated marketing communications, in a release. “It’s a passion -- almost a religion. Superstitions and rituals play a big part, especially in a World Cup year. Nobody wants ‘bad luck’ around their team, but wish it on their rival teams. So, we put a new twist on our popular character.”

Meanwhile, Century 21 Real Estate LLC renewed its sponsorship as the official real estate company of U.S. Soccer. The company signed a multiyear renewal of its sponsorship of the U.S. Men's, Women's and Youth National Teams through February 2016.

The partnership allows the Century 21 System -- which has 7,000 independently owned and operated offices in 77 countries and territories and more than 102,000 affiliated agents -- to place its brand in front of hundreds of millions of futbol fans around the globe.

Century 21 System commercials are airing in-game on the ABC Network and ESPN and on ESPN2 studio programming and commentary before, during and after the U.S. Men's National Team matches in Brazil.

The "Based on a True Feeling" series of commercials depicts how it feels to work with a Century 21 agent. In the spots, clients liken the experience of working with Century 21 agents to feeling like a rock star -- with a cameo from 80s hair band, L.A. Guns, who are surrounded by puppies and relaxing in a Zen garden.