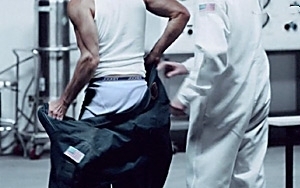 Buzz Aldrin wore them, though probably not during the moon shot. Gen. George Patton may have worn them in the midst of World War II. Jockey's new campaign, “Supporting Greatness,” mentions those two greats, plus Babe Ruth, in a heritage campaign breaking this week.

The campaign -- comprising a humorous TV spot, print, and digital -- depicts Babe Ruth hitting a home run, Buzz Aldrin walking on the moon and George Patton leading his men to victory. The ads show them in action, in real footage from the waist up, and in Jockeys from the waist down (thanks to lower-body models).

The big question likely to be on the minds of just about anyone who encounters the campaign is whether the depicted greats actually wore Jockey products. Dustin Cohn, CMO of Kenosha, Wisc.-based, privately owned Jockey International, says they did indeed don them. Babe Ruth, he notes, actually appeared in a Jockey print ad in the 1940s. The brand, he says, also provided underwear for soldiers in WWII, and NASA tapped the company’s technology for real-world testing.

"One key objective was to leverage our heritage,” says Cohn. “Many people don't realize Jockey has been around since 1876. As we spoke to Millennials, this idea of supporting great men in history was of great interest to them. So we wanted to create an emotional connection through history and humor and at the same time give rational, functional reasons to believe," he says.

All told, the campaign comprises a TV spot, three print ads, and a "pretty healthy digital" campaign, notes Cohn. CBS sports online is the digital partner, and social elements are forthcoming. Cohn tells Marketing Daily that digital legs (no pun intended) will extend the icons-from-history, but also present-day American greats. He says the NFL TV ad buy is through ESPN. "We launched the spot last night on Monday Night Football and got lots of positive feedback on Twitter."

"It's our largest campaign in a long time," says Cohn, who adds that until now marketing for the brand has been product-focused. "So this is first brand campaign that we have had in long time, and it is introducing what we think is an ever-green [brand] position." While the campaign is focused on core products, "what we love about Greatness is that it can encompass other products, whether current or in development."