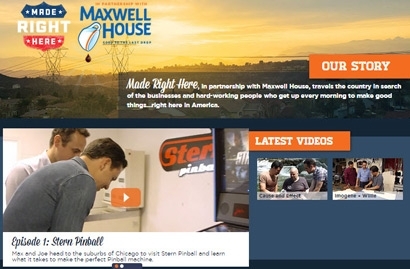 In an extension of its new brand refurbishment campaign — and its first-ever all-digital marketing program — Maxwell House has launched a sponsored digital content series and an AOL-hosted content hub, both dubbed "Made Right Here."

The content includes 10 five- to-seven-minute documentary-style videos featuring American companies (many of them family-owned), that make high-quality products, with an emphasis on the people and their pride in their craftsmanship. All of the videos are co-hosted by Max Wastler and Joe Gannon.

The first three profiles, now live on the hub, feature Stern Pinball (the oldest maker of pinball machines), Imogene + Willie (jeans and unique apparel, home goods and other products), and Cause and Effect (handmade belts). Two more groups of three new videos will be posted at three-week intervals, with subjects including Nokona (baseball gloves), Martin Guitar, Lawn Chair USA, Middletown Made Knives and Schutt Sports. Each company will be the "featured" profile on the hub's home page for one week.

Episode 5 focuses on the Maxwell House's own facility, in Jacksonville, Fla. “Like the other businesses highlighted in ‘Made Right Here’ this season, Maxwell House is passionate about making good, quality products right here in America,” says Chris McClement, senior director, Maxwell House. “Our people pride themselves on the art of making coffee — from selecting the ideal beans to expertly roasting and grinding them — so that hard-working people like those featured in [the other] episodes can fuel their day with a good cup of coffee.”

Brand fans themselves will determine the subject of the tenth episode, by voting online for one of three possible candidate companies.

An accompanying sweepstakes will launch on Oct. 6, offering a chance to win prizes from some of the profiled businesses, including Maxwell House products, an acoustic guitar, a hand-stitched baseball glove and a pinball machine.

Maxwell House will drive awareness of the videos and other offerings through its Facebook page (currently showing 447,000 "likes") and new (as of March) Twitter account (@AGoodCoffee), as well as through the MaxwellHouse.com, and an "extensive" digital advertising campaign, McClement tells Marketing Daily.

Maxwell House's media agency, Starcom MediaVest, presented the "Made Right Here" videos concept to the brand last summer, and worked with Coolfire Studios to produce the creative, he reports.

The idea of "championing people and companies that do good in the world every day" in videos fit with Maxwell House's brand personality and tone, and with the strategy of the overall brand relaunch that was in the planning stage starting a year ago, McClement says.

Once the initial makeover stage was implemented, the brand was ready to move on to developing the sponsored videos concept, which the brand team enhanced by adding the context of the AOL-hosted hub that also serves users' local community interests.

That initial brand repositioning stage, launched in April, introduced new packaging, logos and products, and a new television, digital and social creative campaign from Wieden+Kennedy that revived the brand's "Good to the Last Drop" tagline, and is themed "Say Good Morning to a Good Day."

In June, Maxwell House — while saying that it was satisfied with the campaign — switched agencies, moving to WPP's Taxi. McClement says that now that the brand has been "reanchored," the repositioning strategy will continue to evolve, with other initiatives also in development.

He also reports that Maxwell House has seen some sales and share gains (no specific numbers supplied) since the campaign started in April, and that the brand is "very pleased with the overall response to date."

In April, McClement said that the brand planned to spend between $20 million and $25 million on marketing this year. That would represent up to three times the $7.8 million it spent on measured media last year, according to Kantar Media data.

Maxwell House — one of the Kraft Food Group's billion-dollar brands — was America's leading coffee brand for decades, but has in recent years lost share to Keurig and Folger's. It had a 7.7% share of the North American coffee market last year, compared to Keurig's 18.4% and Folgers's 12.5%, according to Euromonitor International data reported by Advertising Age.