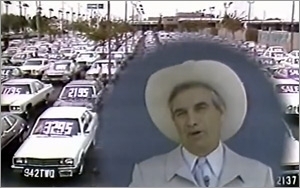 Auto dealers are wasting their money on advertising, especially radio, TV, and direct. Consumers find them neither helpful or trustworthy.

According to a new study by C+R Research, commissioned by Cars.com, TV spots, radio and and direct are the least trustworthy or helpful sources of information, and therefore the least likely to drive consideration.

Shoppers use two to three online sources to research and compare cars, with independent sites constituting half of those. Forty-nine percent of the 1,000 respondents said search engines are influential; 46% said manufacturer Web sites; and 42% said auto dealership sites.

The study says online sources have influence early in the process, offline drive influence later. Respondents reported that they favor independent sites because they offer side-by-side comparisons of vehicles and dealerships.

Only 9% of shoppers are influenced by outdoor ads. Just 8% cited radio advertisements as influencing their buying decision. And only half of all car shoppers reported contacting a dealership prior to visiting, with most citing that they felt it was unnecessary given the information available online.

The study says the biggest influencers -- those deemed most trustworthy and helpful -- were manufacturer Web sites, expert review sites, independent research sites, search engines, newspaper Web sites and previous experience with the vehicle, which respondents said was the most trusted and helpful source. Respondents to the study also said that simply noticing a car on the street served as a driver for consideration.

“Consumers can be overwhelmed by automotive content, but rather than tune it all out, they’re selecting the pieces that are most valuable to them, effectively curating their own car buying experience,” said Simon Tiffen, senior manager of advertiser insights at Cars.com.

Dealership visits are still obviously important, and 68% of respondents said they used online sources to fine one, with one in five shoppers visiting just one showroom and one in four visiting two. And 63% of shoppers reported using their mobile devices at dealerships.

The study, "The Digital Influence: How Online Research Keeps Auto Shoppers in Control," examined online survey responses in late April and May from about 1,000 people, about half of whom said they were in market.