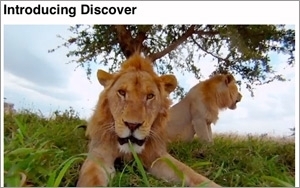 Giving some power back to professional publishers, Snapchat just unveiled Discover — a service for media partners to steer the social media conversation. With Discover, Snapchat is trying to distinguish itself from social media leaders like Facebook and Twitter.

Snapchat is launching Discover with 11 media partners, including National Geographic, Vice, Yahoo News, Comedy Central, Cosmopolitan, CNN, The Food Network and ESPN. Each partner is getting its own channel, which will feature content produced specifically for Snapchat’s young audience.

“Social media companies tell us what to read based on what’s most recent or most popular,” Snapchat explains on its official blog. “We count on editors and artists, not clicks and shares, to determine what’s important.”

Cosmopolitan’s editors, for example, plan to upload a daily “edition” with five articles that users can swipe to view. Each edition will be available for 24 hours, which is standard for Snapchat.Cosmopolitan’s Discover editions will also include sponsored interstitials between articles. Launch partners include Sperry and Victoria’s Secret.

Snapchat Discover adds to the platform’s existing storytelling features, including Snaps, Stories and Our Story. Yet, “Discover is different because it has been built for creatives,” according to the company.

Deputed in late 2013, Snapchat’s “Stories” feature lets users save and share photos for up to 24 hours. Adding a collaborative component to the service, the start-up more recently unveiled its “Our Story” feature, so people at the same events could combine their own “snaps” into a single “story.”

Snapchat only just introduced ads to its platform. Like content in its "Stories" section, the ads disappear after users view them or within 24 hours.

The recently unveiled ads tie into Our Story, which was introduced to many users during the FIFA World Cup final this year. The service’s entire community was given access to a stream of curated content created by attending the big game between Argentina and Germany.

Last year, Snapchat also added location-based filters to its growing list of personalization features, which hinted at some big advertising opportunities for brands. Indeed, a video demonstrating the “geofilters” featured users snapping selfies in front of a SoulCycle, a Groundwork coffee shop and Disney World. Suggesting a clear path to promotional initiatives, each location offered visitors branded images to include in their snaps.