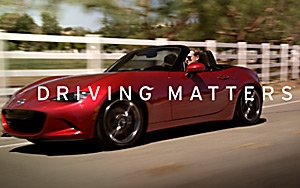 Eight years. That’s the amount of time you’ll spend in your lifetime driving around this mortal coil in your car. After building awareness and consideration with its two-year-old "Game Changers" campaign, Mazda is saying that those eight years should be more than mere motion.

In a new appeal to the emotional possibilities of wheel time, the company is stepping back from a focus mostly on product attributes, including technology such as its SkyActiv suite of technologies, to say, well, “Driving Matters.”

The new message is embodied in a television, in-cinema, print, out-of home and digital campaign that — rather like the effort that introduced the “Zoom Zoom” tag in the early Millennium — makes the brand's MX-5 Miata car a halo for Mazda-ness. The focus on the little coupe is timely as the company is launching the 2016 fourth-generation MX-5 this fall.

The anthem spot, “A Driver's Life,” shows off much of the Mazda lineup of cars and crossovers within the context of a young man’s journey from youth, when he gets his driver’s license, through the time his own kids have gone off to college. His first car? A classic, second-hand Miata, and we see that the roadster is a key aspect of his high school, college and dating life. And then he's a newlywed in a Mazda3; a young professional in a Mazda6; and a dad in a CX-5. Finally, he returns to the Miata, the 2016 version, at the end.

Russell Wager, vice president of marketing at Mazda Motor of America, tells Marketing Daily that “Game Changers” built the brand by talking product from the perspective of revolutionary technology, and by doing so Mazda closed the gap relative to key competitors in terms of awareness. “Right now our level of familiarity [among consumers] is higher than Subaru, VW, Kia, and we've caught up to Hyundai,” he says. “‘Game Changers’ talked about things from a functional standpoint — the ‘what’ and ‘how’ — but the area we need to work on now is ‘why,’ towards going further down the funnel, and working on the gap of opinion and consideration. We have told the rational stories, and now we need to tell more emotional ones.”

He says the idea for the creative narrative came from social media responses from owners as it has prepared for the launch of the new MX-5 Miata. “We had a whole bunch of people posting how they remember their first Miata. So many people somewhere in their life have had an MX-5. That's the story we wanted to tell.”

The launch spot will be followed by ads for Mazda6, the CX-5 and then Mazda3. Presumably, when the all-new CX-3 sub-compact crossover comes this fall, that will be part of the program, too. Wager says the fact that all Mazda products, not just the CX-5, now have SkyActiv fuel-efficiency and performance technology, and reflect Mazda's “Kodo” design philosophy, every ad can be both a brand story and a product ad. “They are brand stories that happen to have a plug-and-play aspect. They all ladder up to the brand.”

The TV buy includes broadcast, cable and online TV on entertainment and sports programming such as ESPN’s coverage of the NBA, “Under the Dome” on CBS and “Black-ish” on ABC. The ads are also running in cinema in over 1,400 theaters and 15,000 screens for summer movies like “San Andreas,” and “Jurassic World.” The digital program includes takeovers on sites like YouTube, as well as digital video, including custom content series on social channels about its vehicles. In one of them engineers balance a Miata on a fulcrum, teeter-totter style, to show how the car is perfectly weighted front to back.

A print campaign runs in 26 titles and 47 insertions, including a four-page gatefold in the 60th anniversary issue of Car & Driver next month.