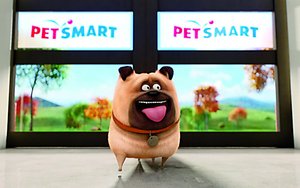 PetSmart has landed its first exclusive retail relationship with Universal Pictures’ “The Secret Life of Pets.”

The movie premieres July 8, but the stars are already appearing in a PetSmart campaign breaking this week. The first of two spots features the characters shopping at PetSmart and include The Rolling Stones' “Sympathy for the Devil.”

The partnership with the movie features an exclusive new collection including toys, beds, collars and apparel inspired by the stars.

Although PetSmart has had license deals with other movies in the past, this is the first time PetSmart has had an exclusive retail relationship. PetSmart worked directly with the Illumination Entertainment filmmakers to ensure the products capture each character’s unique personality, as well as the iconic scenes from the movie

Universal approached PetSmart more than a year ago, said Eran Cohen, chief customer experience officer, PetSmart. “We got early access to the film’s content and we were enchanted and tremendously excited about what we saw and just knew the film was going to be very popular and engaging for our customers,” Cohen tells Marketing Daily. “We have done movie tie-in programs before, but never to this depth and across all our channels from exclusive products and tailored services to in-store, TV, digital and social.”

PetSmart is also sponsoring the “Share Your Pets’ Funniest Secret” video contest. Customers have until June 22 to post 30-second videos featuring funny pet secrets. PetSmart will narrow the candidates for a majority vote conducted June 27-July 5.  The grand prize winner will win a $500 PetSmart gift card and runners up will receive $250 gift cards.

PetSmart Grooming Salons are offering an exclusive “The Secret Life of Pets” bandana. Over June and July, PetSmart will hold two in-store national events tied to the movie’s theme, including a scavenger hunt for kids to look for the signage featuring the characters.

“Our aim with this integrated campaign is to connect and engage with pet parents and families through a massively popular, fun pet-centric movie,” Cohen says. “We already know from associates that the in-store presence is creating lots of buzz and excitement. In just a few weeks, everybody will be able to see and enjoy this wonderful film. We know the movie will be tremendously popular among pet parents and families, which are key targets for us.”