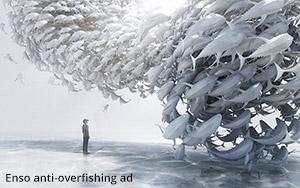 The Nature Conservancy of California is introducing the "This is Our Future" call-to-action campaign to enact meaningful environmental change rather than simply raise awareness for causes.

A year ago, agency enso started working with the Conservancy to pivot its ongoing campaign toward attracting a new generation of supporters in California.

It comes at a time when concern for the environment has been trending down behind other issues.

The first challenge being proposed by the group is to bring tech-enabled monitoring to the long-line fishery industry in the Western and Central Pacific.

The campaign worked with virtual reality shop MPC VR to bring to life a series of surreal worlds that immerse the viewer in the problems facing the fishery industry and how technology can catalyze change.

Next, technology leaders, including Matt Idema from Facebook, engineer Tray Chou and Anthony Goldbloom from predictive analytics modeling platform Kaggle signed on to be ambassadors for the campaign and to galvanize the tech community.

Cultural influencers and artists Yosi Sergant, Charlie Becker and Joseph Alessio have also joined the effort to inspire their peers and help bring the issue to life.

Also a machine learning competition on Kaggle will open on November 14 to solicit new ideas on how to track the fishing industry.

“Enso was instrumental in helping the Conservancy shift the paradigm from a traditional awareness campaign to a shared mission where innovators and thought partners from the innovation world could come together with the Conservancy to collaboratively solve pressing nature challenges and create real world value,” says Jordan Peavey, director of field marketing, Nature Conservancy, CA.