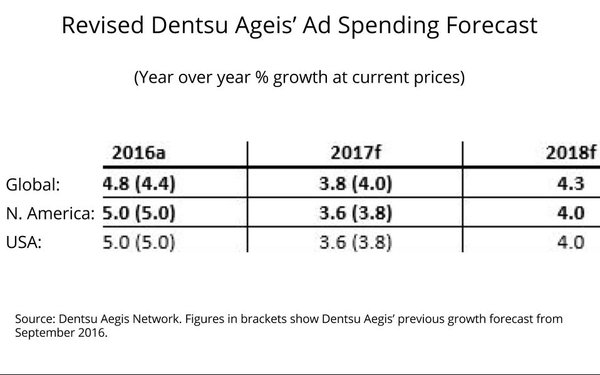 A day after Interpublic’s Magna Global unit revised its 2017 ad outlook downward, Dentsu Aegis Network has done the same, albeit with a more moderate downgrade for the U.S. ad marketplace.

Dentsu Aegis has shaved two-tenths of a rating point off its last forecast in September 2016 for both worldwide and U.S. ad expansion in 2017, and is now projecting those markets will grow 3.8% and 3.6%, respectively.

That’s about the same rate of worldwide ad spending growth projected by Magna in 2017 (+3.7%), but is more than double the rate of expansion Magna currently predicts for the U.S. ad marketplace (+1.6%).

Acknowledging that it has a “more cautious economy outlook” than when it set its previous forecast, the Dentsu Ageis report predicts “conditions are set to improve in 2018,” citing incremental ad spending stimuli such as the Winter Olympics & Paralympics in South Korea, the FIFA World Cup in Russia and the US Congressional elections.”

Like other top forecasters, Dentsu Aegis noted that digital, especially mobile, are becoming the “new default settings” for the ad marketplace.

“Our forecasts show how digital technology continues to disrupt and drive innovation in the way brands connect with their consumers,” the report says, projecting that mobile will overtake desktop Internet ad spending to reach a 56% share of global digital ad spending.

Total digital media, meanwhile, is projected to become the dominant source of ad spending in 2018, supplanting TV’s No. 1 position.