CTV Users Watch Ad-Supported 47% Of The Time, Are Twice As Likely To Buy After Seeing Ads 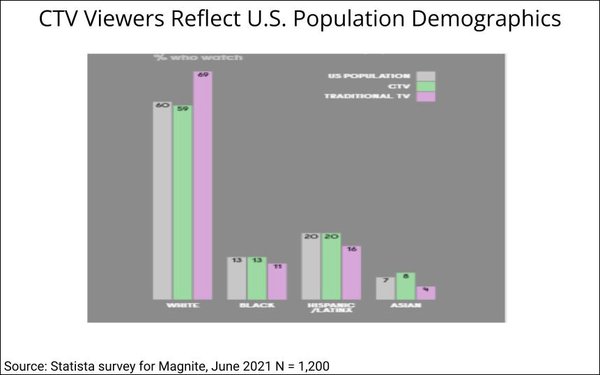 Nine out of 10 U.S. connected TV (CTV) viewers report watching ad-supported content — up from four out of five a year ago — and these viewers estimate that 47% of the content they watch is ad-supported, versus 53% ad-free, according to a survey conducted in June by Statista for sell-side advertising platform Magnite.

The research surveyed 1,200 U.S. residents age 18 and older who self-reported watching at least one hour per day of television. Three viewing types were polled: those who only watch traditional cable/satellite TV (22%); those who watch mostly/only CTV TV (37%); and those who watch a mix (41%).) Magnite sponsored a similar survey a last year.

Nearly all (96%) of CTV viewers subscribe to at least one paid streaming service, while 60% report watching free ad-supported TV streaming services (FASTs). (In the report, "CTV viewers" is defined as including mixed viewers, as well as CTV-only viewers. In our study, 22% watch only traditional (linear) TV; 37% watch mostly/only CTV (includes live programming carried on vMVPDs / FASTS) ; 41% are watching a combination of linear and CTV.

Twenty-three percent of CTV viewers report having made a purchase after seeing an ad, versus 12% of traditional viewers.

Nearly half (47%) of CTV viewers said they are willing to share information to receive relevant ads, compared to 28% of traditional TV viewers.

Forty-four percent of CTV viewers report watching more than they did 12 months ago, compared to 29% of traditional TV viewers.

On average, traditional TV users still spend more time watching TV than their streaming counterparts, but the gap is closing, with most streamers watching about 2.5 to 3 hours per day.

Sixty percent of CTV users who also use social media platforms aren’t watching professionally produced content such as TV shows and movies (they typically watch that content on CTV), and just 21% of say they’re likely to pay attention to a video ad on social media.

Extrapolating from eMarketer data, Magnite estimates that there are now 55 million CTV-only U.S. households, and that 50 million of these watch some ad-supported content.

That means that 40% of all U.S. TV households cannot be reached by cable/satellite via a traditional linear TV connection, underscores the report.

Magnite also describes CTV viewers as “the new majority,” citing 2021 data from The Trade Desk finding that there are now more than 87 million ad-supported U.S. CTV households, while eMarketer projects that cable/satellite households will decline to about 70 million by 2022.

The survey confirms that traditional TV viewers skew heavily to those 55 and older, while CTV viewers are well-represented across all age groups. CTV also reaches 86% of households with children. 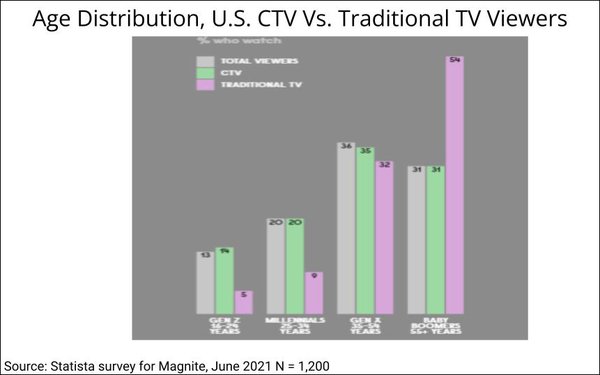 The survey also finds CTV viewers to be more diverse than traditional viewers. The CTV audience mirrors the national population, whereas traditional TV over-indexes against white audiences and under-delivers against Latinx and Asian audiences. (See chart at top of page.)

“We expect to see this trend strengthen in 2022 as CTV media owners and content producers invest in more culturally diverse programming,” writes Magnite.

Smart TVs are driving CTV viewership: 82% of homes that watch CTV own a smart TV.

“This group is an easy activation away from becoming CTV viewers,” observes the report.