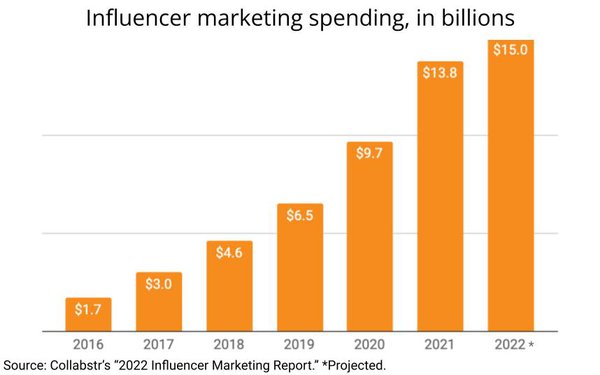 By the end of 2022, it is projected to reach $15 billion. So what should advertisers know about this rapidly growing market?

The report, "Everything You Need to Know About Influencer Marketing," analyzes data that Collabstr sourced from over 5,000 advertisers and 27,000 influencers.

For influencer platforms, the report focuses mainly on Instagram, TikTok, and YouTube -- comparing marketing budget shifts, content pricing changes, and influencer demographics and niches, along with insights into what social media collaborations will look like in 2022.

Instagram topped this short list as the most popular social media platform among influencers getting brand deals. Ninety-four percent of influencers that were offering paid-content services to brands offered services on Instagram.

The report likened YouTube’s low influencer reach-out rating to the greater amount of effort required to develop an audience on YouTube than on Instagram and YouTube. This may be the same reason that creators on YouTube are compensated more for their services when working with advertisers.

To determine specific content pricing, Collabstr used its "influencer price calculator," which calculates how much advertisers should charge on social media platforms based on 50,000 recorded influencer rates.

On average, influencers charge advertisers $1025 for original content on YouTube. That number drops to $530 for TikTok and $410 for Instagram. Higher prices are charged when there is a greater presence of video content, which is why Instagram -- with plenty of static photos -- is lowest.

The report showed that brands spend an average initial $174 on influencers. The average time that brands and influencers work together was 15 days. However, advertisers with no physical products are able to cut this time down.

Collabstr also found that it takes influencers an average of 18 hours to respond to a brand’s initial outreach.

Based on 2500 collaborations between brands and influencers, Collabstr found that Instagram received the highest percentage of influencer marketing budgets, at 48%.

Tiktok was a close second, capturing 46% of influencer marketing spend from advertisers, while YouTube had only 6%.

According to the report, brand spend on influencer marketing is concentrated in North America -- specifically in the U.S., with 70.63%. Canada ranked second with 12.9%, followed by the U.K. at 5.36% and finally, Australia with 5.2%.

Influencer marketing is currently dominated by female. Seventy-seven percent of influencers who are actively monetizing their content are female, while only 23% are male. This  makes sense, as recent studies show women’s photos perform vastly higher online than men’s photos. In 2015, The Independent reported that photos of no one received more likes than photos including men.

More specifically, of these three platforms, Instagram had the highest percentage of female influencers, at 78%, while YouTube had the lowest, at 69%. Collabstr also noted that as follower counts increased, the market share between female and male influencers became more evenly distributed.

The rise of short-form content has led to an "unprecedented supply of content creators in every niche imaginable," the report states. Eighty-seven percent of brands were found to be encouraging the production of user-generated content -- a number Collabstr expects to rise as short-form video social platforms like TikTok capture more consumers’ attention.