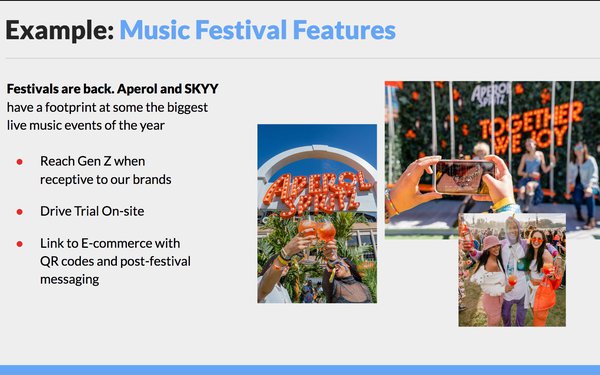 Four years ago, the first Gen Z-ers turned 21, and over the next 11 years, the rest of these nearly 70 million Americans will also reach drinking age. So, naturally, the alcoholic beverage industry is keenly interested in their habits, as evidenced by a webinar conducted by Campari and Drizly’s BevAlc Insights.

Drizly, of course, is doubly interested in Gen Z because this generation tends to shop online more than other demos. Amit Patel, the ecommerce giant’s senior vice president of ad monetization and partnerships, pointed out that while Gen Z makes up 20% of the U.S. population, those over 21 already comprise 5% of Drizly shoppers.

Their purchasing decisions, Patel noted, are influenced mostly by social media -- particularly TikTok, Instagram and Snapchat -- and they’re “most likely to learn about new beverage brands through social ads.”

Emily Bibeault, Campari America’s ecommerce director, provided a current example of two Campari brands --Skyy vodka and Frangelico liqueur, both ingredients in the trendy espresso martini  -- teaming up on Instagram Stories and other social media. The brands are also using ecommerce platforms like Drizly, she said, “to drive awareness when the consumers in Gen Z are shopping for spirits.”

Gen Z drinkers focus more on experiences like music than do millennials, “who tend to splurge more on opportunities that will drive relaxation,” Patel noted.  This has “led to occasions tied to concerts, festivals, other music-inspired events.”

“Music festivals are where we can reach Gen Z in the moment,” Bibeault agreed, “and this moment’s going to be big this year.” She promised that Campari will have Aperol aperitif and Skyy “at some of the biggest events in live music this summer.” These activations will include on-site cocktail trials and QR codes on site, where a scan will provide “information on how to get it delivered by Drizly when you get home.”

Another characteristic of Gen Z, Patel reported, is a “very strong point-of-view about standing up behind and supporting cause-led brands,” expecting brands to “act as partners in driving social causes forward.” This group is also more committed to “historically marginalized groups than other demos.”

In this vein, Bibeault pointed to Skyy’s longstanding support of the Pride movement. Launched in San Francisco in 1992 (and so some five years older than the oldest Gen Z-ers), the brand “has been a vocal supporter of the LGBT community” for decades, she said, and will be the official vodka of NYC Pride this June.

Gen Z-ers furthermore are themselves the “most racially and ethnically diverse generation in U.S. history,” Drizly reported, overindexing in both Hispanic and Asian makeup compared to previous generations.

This, in turn, may be helping some of the product categories where Gen Z drinkers also overindex. One major example, noted by Patel, is soju, a Korean rice spirit, where Gen Z has accounted for 26% of Drizly sales in the past year. The demo also accounted for 8% of tequila sales during that period.

Bibeault noted that Campari’s Espolón is now the “number-one premium tequila sold online,” attributing the rise not only to quality and price but to its brand heritage: “established in 1999, it was built as a tequila for the people, so knowing that it’s inspired by and a tribute to Mexican culture, I think it shines through and resonates with them [Gen Z].”

Campari also introduced its Aperol Spritz RTD cocktail last year, so it should be noted that largely due to its love of things new and innovative, Gen Z has been Drizly’s “key driver in RTD cocktails” over the past year.