YouTube's Impact On Kid-Driven Purchases, And Kids' Early Dive Into The Metaverse 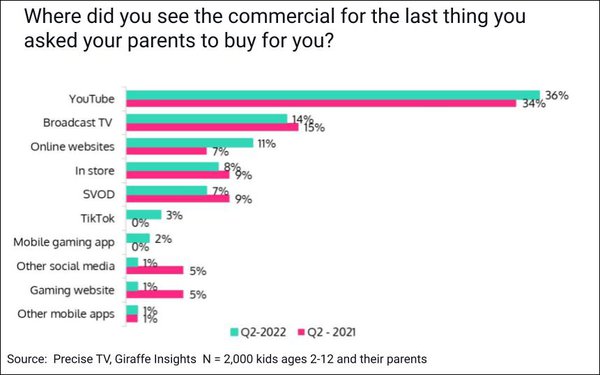 We all know that kids heavily influence their parents’ purchases. And when it comes to influencing the kids themselves, it seems that nothing beats YouTube.

Or so confirms the latest survey of kids and their parents conducted by COPPA-certified YouTube ad platform Precise TV and kids’ research firm Giraffe Insights.

The online survey of 2,000 kids ages two through 12 and their parents, conducted in June found 85% of kids are accessing YouTube (the same as in 2021’s survey), although reported use of many other media, including subscription-based video-on-demand (SVOD), gaming and broadcast TV, have declined since the April 2021 survey.

Perhaps not surprisingly, TikTok and going to movie theaters (now that they’re open again) are among the few that have seen upticks. 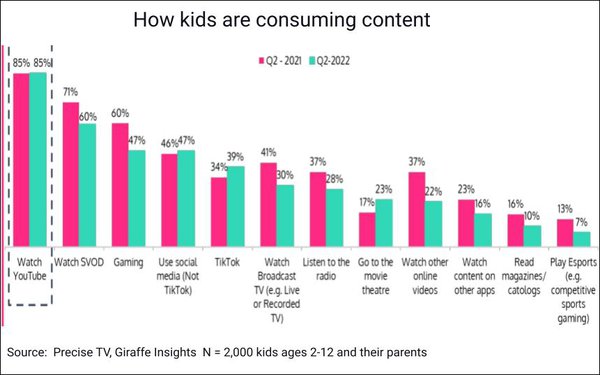 The survey also finds kids twice as likely to recall ads on YouTube than any other platform — although the YouTube recall percentage declined by six points, to 64%, in this year’s survey.

Broadcast TV comes in second, followed by SVOD and other online videos. TikTok, while increasing in influence, is still far down the scale, at 11% — and social media and gaming ads also seem to have surprisingly little impact. 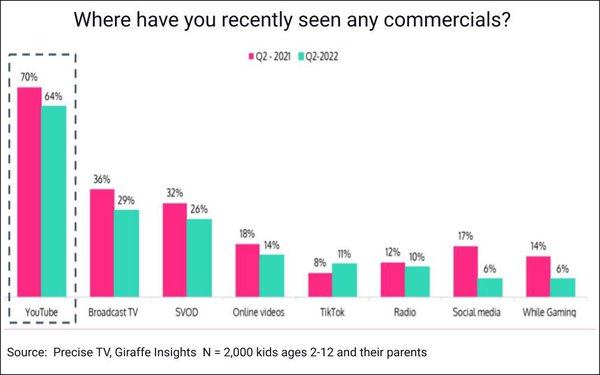 And perhaps most important, YouTube ads were found to be three times more likely than other platforms to drive kids to ask their parents to buy things (chart top of page).

Ninety percent of parents report co-viewing content with their kids, and nearly half report doing so every day.

Parents report that they’re most likely to co-view with their kids on YouTube and video-on-demand.

On YouTube, they are most likely to co-watch “Ryan’s World” and “Peppa Pig Official,” on SVOD, Netflix and Disney+, and on broadcast the Disney Channel and Nickelodeon.

YouTube and broadcast TV are most-cited as the platforms they’ve seen ads on when co-viewing. 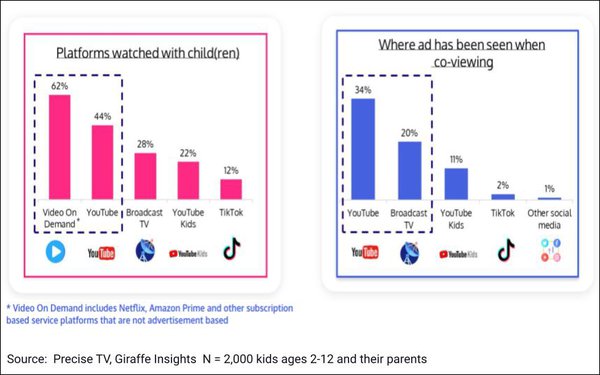 Eight in 10 parents report being more likely to purchase a product when they’ve seen the ad with their kids, and seven in 10 say they get their ideas for things to buy their kids when they see kids’ reactions to ads.

The purchases most-influenced by kids are vacations (including activities, destinations, food and drink and other aspects) and out-of-home experiences, though they also have some influence on technology, cars/family vehicles and kitchen/home appliances.

Word-of-mouth and websites are the top sources for vacation ideas.

Perhaps more intriguing than their video behavior, many kids are not only already surprisingly aware of and into it, but using tokens to buy virtual stuff, at least according to this survey.

How? Games are the “gateway,” the researchers report (calling up, at least in my mind, unfortunate associations with the old saw that pot was a gateway to addiction to more dangerous drugs).

Nearly half of the kids surveyed could identify the games Minecraft, Roblox, Fortnite and Sandbox as being in the metaverse, and 20% said they’d used tokens in the metaverse while gaming to purchase virtual items like clothes, money and tools.

But just four out of 10 parents understood the metaverse to be a virtual world where people can socialize, work and play.