Why Twitter's Ad Outlook Is The Real Hellscape 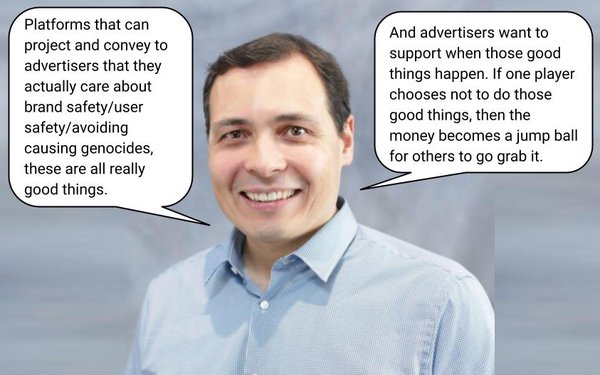 There was a lot to unpack from GroupM Business Intelligence's "This Week Next Week" podcast this week, but that's because co-hosts Brian Wieser and Kate Scott-Dawkins were giving their takes on what was the biggest earnings call week of the quarter in terms of the data they use to build their publicly traded company ad revenues composite for tracking and forecasting their ad industry outlooks. I'll follow up with a separate news story on that, but for the purposes of this week's "RTBlog," I'd like to focus on a company that will be leaving GroupM's composite effective this quarter: Twitter.

Wieser, who already speculated that there might be an exodus of ad dollars following the previous week's news reports about expectations of big staff cuts at Twitter, this week indicated that some especially important immediate cuts made by new owner Elon Musk likely will have an immediate effect on its ad revenue.

"When you let go of the people who were responsible for keeping the platform brand safe, and there is no one immediately in that role, that’s shall we say, ‘problematic'," Wieser quipped, adding: "Because you would think when one has enough time to go through an acquisition, one might be aware of this matter and have someone ready to go, even on a temporary basis. And that’s not what we’re seeing."

While Musk tweeted and open letter to the ad industry late last week in an attempt to reassure advertisers that Twitter, as an ad platform, would not become a "free-for-all hellscape," he followed up with one hell of a tweet -- then taking it down -- linking to a conspiracy theory about the break-in and attack on Nancy Pelosi's husband and a comment that "there might be more to this story than meets the eye."

Continuing mixed ad-industry signals aside, the uncertainty surrounding the ongoing brand safety of Twitter comes as others have been making significant strides.

Wieser and Scott-Dawkins pointed out last week that Snap has been a beneficiary of that, and they added this week that Pinterest has also been attracting advertising budgets because of it.

Noting that Pinterest "has done a lot in terms of making a brand-safe environment," Scott-Dawkins said the social media platform "saw a +10%" increase in its third quarter advertising revenues "on a constant currency" basis, and that it was "above expectations."

To which Wieser responded: "I think it’s safe to say that platforms that can project and convey to advertisers that they actually care about brand safety/user safety/avoiding causing genocides, these are all really good things. And advertisers want to support when those good things happen."

And while the GroupM team didn't exactly say other brand-safe social platforms would likely continue to benefit from the mixed signals coming from Twitter, Wieser did note: "If one player chooses not to do those good things, then the money becomes a jump ball for others to go grab it."

Something they didn't state explicitly was also apparent: That along with taking Twitter private, Musk will be operating it with far less transparency than it did as a public company.

In other words, if you thought a Twitter that was accountable to shareholders, Wall Street analysts and the Securities and Exchange Commission was a hellscape, well, you probably ain't seen nothing yet.

While Wieser did not speculate explicitly on that, he did say there will be far less visibility about how well Twitter is doing vis a vis advertisers.

"As a private company we won’t really know what the erosion is, or even if there is growth, based on the preliminary plans," he said, noting that Twitter had already been "declining and in a weak position on a relative basis" before Musk took it private.

In terms of GroupM's media company ad-revenue composite, he said: "Well just have to make some assumptions" about Twitter going forward.