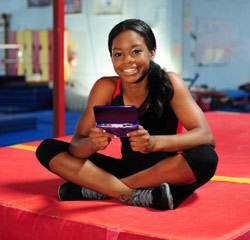 Nintendo is looking to attract more women to its ranks of players, launching a new campaign for its 3DS handheld gaming system, depicting female celebrities playing the titles that best represent them.

The campaign, launching on Oct. 1, employs the tagline, “Play As You Are,” and shows TV stars Dianna Agron ("Glee"), Sarah Hyland ("Modern Family") and U.S. Olympic gold medal-winning gymnast Gabrielle Douglas, playing various games on their 3DS systems. In the ads, the celebrities show how specific games reflect their interests and personalities.

For instance, Agron (who, in addition to acting, is a blogger and supporter of the visual arts), is featured in ads for "Art Academy: Lessons for Everyone," which enables players to learn painting and drawing techniques that can be used in real life. She also appears in spots promoting the puzzle-solving adventure game, "Professor Layton and the Miracle Mask." Similarly, Hyland, a budding fashionista, is seen in ads for "Style Savvy: Trendsetters." (Douglas, meanwhile, will appear in broadcast advertising touting "New Super Mario Bros. 2.")

“These women are all amazing role models with their own unique tastes and talents,” said Scott Moffitt, Nintendo of America’s executive vice president of sales and marketing, in a statement. “They know firsthand how Nintendo 3DS can keep them entertained and engaged wherever they go. We think young girls and women of all ages will enjoy hearing what they have to say about their favorite games and activities on Nintendo 3DS.”

This is not the first time Nintendo has used female celebrities to promote its handheld games. Nicole Kidman and Lisa Kudrow appeared in spots for the DS Lite, while Beyonce appeared in television ads in a 2009 television campaign. Despite the broader appeal of females playing games (via their smartphones and social games), there’s still very little marketing around women playing games just because they like them, says Heidi Duran, editor-in-chief of the website and social community Girlgamer.com

“I think it’s a great idea. It shows that girls are playing what they enjoy and I think it’s important for girls to see people they admire playing a game just because they enjoy it, and not to impress anyone else,” Duran tells Marketing Daily. “I’ve been in the female gaming community niche for four years, and what I’ve seen is a pressure on girls to only like pretty pink games targeted toward girls, or they feel a need to play more hardcore games to seem like a legitimate gamer.”