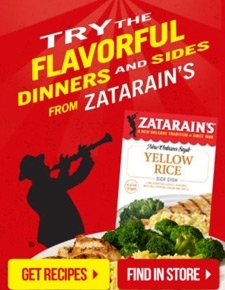 The rollout of Apple’s iBeacon technology is one of the most closely watched trends in mobile marketing and retail circles this year. For stores and brands, it holds the promise of boosting sales by delivering offers and information to customers via mobile when they enter a retail location or while shopping in specific departments.

Among the initial wave of companies embracing iBeacon is mobile shopping platform InMarket. Earlier this year, it launched an iBeacon-based network at some 200 supermarkets that ping smartphone-wielding shoppers with things like loyalty rewards, targeted coupons and grocery list reminders in-store.

The company's Mobile to Mortar network uses InMarket's CheckPoints and List Ease shopping apps to send in-store marketing messages to shoppers instead of relying on retailer-specific apps. With its iBeacon system up and running, the company today named McCormick & Company-owned Zatarain's as one of the initial brands running a campaign using the technology at grocery stores in Southern California.

Zatarain's is running recipe-focused ads for its rice products. A shopper with the CheckPoints app, for example, would receive a Zatarain's ad when near the store that would allow them to click one button for recipes and another to scan the product -- New Orleans Style Yellow Rice -- to earn rewards points using the app's barcode reader.

“So we're basically driving people into the store, and when they're in the store, we drive them down the aisle, and have them pick up the product to learn more about it,” explained InMarket CEO Todd DiPaola. Because many retailers' point-of-sale (POS) systems don't still don't accept mobile coupons, he noted, the focus is on using other approaches to entice customers.

In this case, Zatarain's, and its agency Peter Mayer, identified recipes as a “key driver of purchase habits” for customers so that became the focus of the campaign. InMarket is selling iBeacon ads on a cost-per-engagement basis, so Zatarain's wouldn't pay until someone actually picks up a box of rice and scans it.

DiPaola said the CPE rate runs closer to about a $1 -- far higher than a typical banner ad rate -- because it’s delivering more bang for the buck. “On one hand you could say it's more expensive for a brand, but our studies have shown it’s significantly more impactful,” he said, in boosting sales as well as brand awareness and purchase intent.

When it comes to sales, he noted that split testing in several of the campaigns so far -- where the iBeacon ads were run in half the stores but not the other -- have shown a lift in purchases where campaigns are running. The company has not disclosed specific stores participating in its Mobile to Mortar network, but said it plans to expand nationally and install more than 40,000 by year’s end.

It also plans to link the service soon to additional apps in addition to CheckPoint and List Ease. InMarket has competition from other companies rolling out beacon networks including shopkick and Mobiquity, which recently announced a mall-based network that covers 3,000 retailers and 15,000 storefronts.

It will certainly take more than a few months and more extensive results to get a better sense of whether iBeacon is anything like the game-changer that retailers and brands are hoping for and vendors are promising. A recent Forrester report suggestedthat hurdles include the set-up required, the need for consumer apps to integrate with iBeacon systems, and consumer awareness.