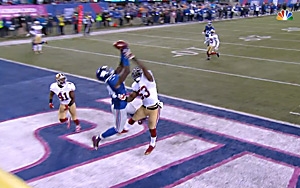 With just about a third of the NFL season completed, national advertising revenues from NFL programming -- as well as viewership metrics -- continue to mostly trend higher.

After five weeks of the season, total national TV advertising revenue and value across all NFL TV networks -- CBS, NBC, Fox, ESPN, and NFL Network -- is up 5%, pulling in $947.7 million, according to iSpot.tv. This is up over the $905.5 million over the same period a year ago.

FanDuel and DraftKings have been major new players this season.

TV ratings are higher across virtually all TV networks. For example, CBS’ “NFL on CBS” -- the network’s Sunday afternoon broadcast of games -- is averaging a Nielsen 18.2 million viewers, which the network says is the highest through the first five weeks of the season going back 29 years.

Through four games, Fox is down slightly by 3% at 19.93 million for its Sunday daytime/afternoon games for its 20.5 million viewers for the same period.