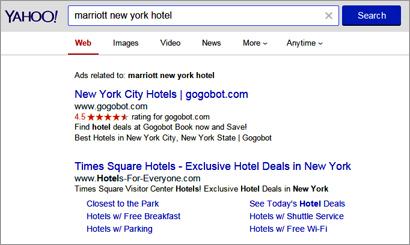 Marriott International tracks thousands of branded keywords worldwide through The Search Monitor. The hotel chain sees about one million infringements monthly where someone is bidding on a brand term. Most of these come from online travel agencies (OTAs), media search sites, affiliates, and some competitors. About two-thirds of clicks on branded terms are captured by Marriott.

A couple of internal studies estimate the financial impact of trademark infringement. Marriott sees "hundreds of millions of dollars in revenue loss" annually that goes to other channels -- distributors intended to work with the hotel chain, not compete with it, says Alex Edlund, director of search marketing, Marriott International. This total for loss doesn't include branded terms, he says.

Edlund spoke at the MediaPost Search Insider Summit about protecting a brand in search against trademark infringement.

"We're not going to tell Expedia that we will remove their inventory if [they bid on] the brand term again," Edlund says. "It doesn't make sense, but we do have to repeatedly work with them to make sure they're aware of the issue."

Edlund says Baidu has the worst issues in terms of infringement, not just paid-search ads. They have a lot of fake Web sites ranking really well. Working directly with Baidu is an interesting thing because it's often "who you know and how much you're willing to spend with them if you want to get something done," whereas Google, Bing and Yahoo have pretty much the same policies.

Lori Weiman, CEO at The Search Monitor, analyzed about 100 top brands ranging from Nike and Oakley to Macy's and other retail stores. She saw more than 2,000 ads during the past 14 days across these brands that were not the brand-holders' ads. There were a mixture of authorized retailers, along with search engines, shopping engines, offer coupon sites that may not or may not be an affiliate, review Web sites, and competitors.

More than 21 ads per brand serve up that do not belong to the brand-holder. Every time a ad shows up that is not the brands', it adds competition and the click might go to competitors. For every competitor added into the mix, between 10% and 12% goes to another brand. It also means the cost per click rises.

Weiman also brought up affiliate direct-linking issues where the affiliate runs an AdWords campaign that looks like the retailer's ad, but they never direct the traffic there. It bypasses through a redirect to the affiliate channel rather than the search channel. This can cause trouble, higher prices, when it comes to the CPC because the retailer ends up competing against itself. During the 14-day study of the 100 brands, about 33% had direct-linking issues.

You can watch a recap of the panel here.