Netflix still ranks as the video “network” considered “most indispensable” by U.S. TV viewers, but it’s losing ground — while three-month-old Disney+ is already viewed as a must by about 14% of viewers.

So finds Hub Entertainment Research’s new “Evolution of Video Branding” study. Last month, Hub surveyed a U.S. census-balanced sample of 2,015 consumers ages 16 to 74 who have broadband access and watch at least an hour of TV per week.

The survey, conducted annually since 2013, examines how consumers discover, choose and consume entertainment content, including awareness of various TV brands, how brands influence what viewers watch, and which are perceived as providing the best content and experiences.

Asked which networks they would keep if they could only keep a limited number, 39% of viewers currently name Netflix. That’s 11 percentage points more than the runner-up CBS, but down significantly from Netflix’s 44% in last year’s branding survey.

CBS’s 28% slipped just a point from last year, putting it in a tie for #2 with ABC (cited as indispensable by 28% both this year and last). 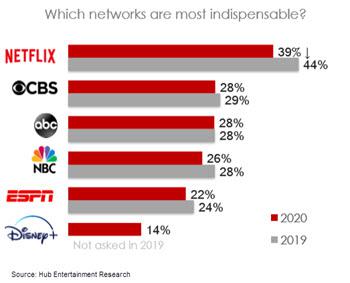 Could Disney+’s arrival already be affecting the scores? Possibly. The new streamer wasn’t around for 2019’s survey, but Hub notes that being considered indispensable by 14% of overall viewers surveyed, so soon in its lifecycle, is notable.

Furthermore, Disney+ is even more influential among younger viewers — cited as indispensable by fully 25% of those between the ages of 16 and 34. While that’s still far below Netflix’s 53% among this group, it’s just shy of Hulu’s 26% and handily beats ABC’s 15% and ESPN’s 24%.

Importantly — as Netflix is well aware, judging from its huge production budgets — the SVOD’s popularity is strongly rooted in its original content offerings.

Overall, nearly six in 10 (57%) of viewers say that the description of a show as “original” makes them more interested in watching it (with 16% and 41%, respectively, saying it makes them “a lot” and “a little” more interested).

And Netflix leads by a long shot when viewers are asked which brands produce the best original shows: it is cited by 23%, versus just 6% for runners-up Amazon Prime Video and ESPN. CBS and HBO were cited by 5% and 4%, respectively, on this question.

The power of hit — or at least visible — shows also continues to be clear, particularly among younger audiences.

Fully 54% of those 16 to 34 report having signed up for a video service within the past year for the specific purpose of getting access to a show exclusive to that service. Nearly a quarter (22%) of those 35 and older say the same.

Interestingly, a whopping 61% of Disney+ subscribers in the survey said they have signed up for a new service (not necessarily Disney+, but still…) for that reason. Could this have anything to do with “The Mandalorian”? Just asking.

Asked what makes them most interested in watching a show, just 32% of the younger viewers —  versus 44% of those 35 and older — cite the genre of a show.

Similarly, 19% of the younger demo, versus 24% of the older, cite the network brand.

Factors that — according to their self reports, anyway — are more influential among the younger than the older include access to all episodes at once; being recommended by the service provider; a show’s “buzz” quotient; big production values/budgets; and the ease of binge-watching a few episodes: 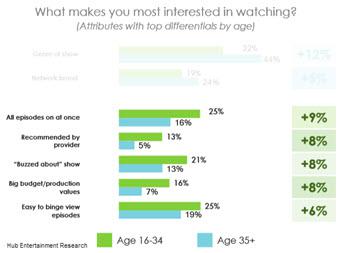 More evidence that viewers tend to underestimate the influence of network brands on their viewing choices: Just 25% overall say the network a show is on has a significant impact on their decision to watch (rating that factor between 8 and 10 on a 0-to-10 scale).

Another 22% say the network makes little to no difference (rating it between 0 and 2). The remaining 53% fall in between, offering a neutral response.

But the real influence of network brands is demonstrated by a follow-up question designed to tap into underlying perceptions.

All respondents heard the exact same description of a fictitious crime drama, but different respondents were told different things about the identity of the network that will air the show (17 different sources were tested across the sample).

Result: Interest in watching the show varied significantly by the source it was associated with. Those told it would be a Netflix show were the most interested, followed by Fox, CBS and HBO.

“When it comes to viewing decisions, the impact of ‘brand image’ is a lot like the impact of advertising,” concludes Hub co-founder Peter Fondulas, who co-authored the study. “Most consumers reject the notion that their decision to watch a show is influenced by something as intangible as their general perception of the TV source airing it. But these results demonstrate that brand perceptions play a key role in helping viewers navigate today’s vast TV landscape and decide which shows are at least worth a try.”

So much for branding’s “irrelevance” in today’s environment.