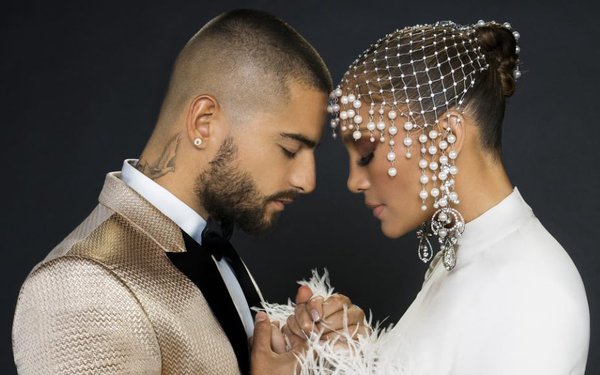 On February 8 at 9 p.m. ET, people around the world will be able to tune into Peacock TV's TikTok channel @peacocktv to watch an exclusive concert event featuring superstar Jennifer Lopez and Colombian singer-songwriter Maluma perform songs from their new major film, "Marry Me."

Marry Me Tonight! Jennifer Lopez & Maluma Live will be a packed one-hour event to promote the Universal Pictures major motion picture, which hits theaters (and Peacock) on February 11.

Along with multiple songs from the movie soundtrack, the concert will feature an intimate acoustic version of his song “Segundo” and the live marriage of four real-world couples –– an elaborate marketing move right in time for Valentine’s Day, “inspired by the film’s sweeping romance about the power of love to overcome any obstacle,” the statement reads.

The couples, one of which whom won iHeartRadio’s MYfm Marry Me contest, will be married by an ordained minister with Jennifer Lopez and Maluma in attendance.

The concert will be recorded live at the Dolby Family Terrace at the Academy Museum of Motion Pictures in Los Angeles, directed and produced by Glenn Weiss and Ricky Kirshner, founders of White Cherry Entertainment, which has won awards for various major television specials.

Universal Pictures’ decision to air a concert event promoting a major motion picture on Peacock makes sense as they are both owned by Comcast. But including TikTok makes equal sense: the music industry is taking note of the increasingly popular social media network.

TikTok has become a key platform for fans discovering new music, as well as a place for up-and-coming artists to make it big. According to a recent article in Business Insider, trending songs on TikTok are likely to chart on the Billboard 100 or Spotify Viral 50. Put simply, Jesse Callahan, founder of upstart marketing firm Montford Agency, said, “Music marketing on TikTok is huge.”

With audience reactions and behind-the-scenes looks, TikTok also provides a personal element that appeals to viewers. This even applies to coverage of the Winter Olympics, which is also streaming primarily on Peacock.  Gizmodo reflected on how the current viewer is more loyal to Olympic athletes and people than a TV network.

The concert event will also be available free to Comcast’s Xfinity X1 and Flex customers, as well as Cox Contour customers with Peacock Premium subscriptions.