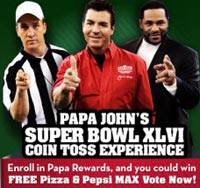 The Super Bowl is one of the five biggest days in the year for pizza chains, and they seem to compete more fiercely for a share of that pie each year.

Last year, Papa John’s, the NFL’s official pizza sponsor, opted not to advertise during the game, instead running a double-whammy promotional strategy. The chain promised a free, large, three-topping pizza to all of its online rewards program members if the game went into overtime -- and further primed the pump by giving away a $45 Papa John’s gift card every 45 seconds to randomly selected consumers who ordered its pizzas online during game day.

Results: Papa John’s sold more than a million pizzas on Super Bowl Sunday, besting its own previous record of 940,000 sold during game day in 2010. (Prior to the 2011 game, rivals Pizza Hut and Domino’s Pizza estimated that they would sell 2 million and 1.2 million pizzas, respectively, on Super Bowl day.)

Papa John’s sales lift came, of course, without having to give out free pizzas –- since the Super Bowl maintained its own record of never having gone into overtime. Not to mention upping its loyalty program membership numbers “very significantly,” according to a spokesperson. Capturing the customer data that enables targeted promotions to drive more online/mobile orders is, of course, the name of the game for pizza chains, along with many other restaurant chains these days, and Papa John’s is still the only pizza chain with a system-wide rewards program.

How to follow its own act? This year, Papa John’s is giving its fans much better odds by making its offer to give a free, large, one-topping pizza and a two-liter Pepsi MAX to its millions of Papa Rewards members contingent on the game’s coin toss. Specifically, rewards program enrollees can call heads or tails on the toss online at papajohns.com, as part of an interactive video, and if the preponderance of their votes turns out to correctly predict the toss, all members will get the freebies (instructions for redemption will come by email). Coin-toss voting ends Feb. 1, and the chain will pre-announce the voting results on Feb. 2.

Papa John’s also changed its sweeps strategy this year to maximize pre-game-day orders. This time around, it’s been randomly selecting winners from among online pizza-orderers every 46 seconds each weekend leading up to the Super Bowl, starting on Friday, Dec. 30, and ending on Saturday, Feb. 4, the evening before game day. (Actually, per legal requirements, rewards members also can enter without ordering a pizza, by following online instructions.)

Also, this time, it’s awarding large, one-topping pizzas instead of $45 gift cards -- likely a sound financial move, given that up to 15,963 pizzas could be given away over the 17 entry-period days leading up to the Super Bowl.

Papa John’s investment skin in this promotional game isn’t, of course, limited to the cost of free pizzas -- however many that turns out to be. The elements of the ambitious marketing campaign supporting its “Coin Toss Experience” include:

Bettis, who is a finalist for 2012 Pro Football Hall of Fame induction (inductees to be announced the day before the Super Bowl), makes light of his involvement in the NFL’s most controversial-ever coin toss on Thanksgiving Day 1998. Colts quarterback Manning alludes to his having been out the entire season due to a neck injury by playing a referee in the spot (“a man’s gotta work”). Manning will also “surface” on game day in his hometown, with Papa John’s, according to the chain’s spokesperson.

While relatively few promotion participants are likely to be experts in statistical probability, between now and game day, they can mull the following fun facts: Over the 45 Super Bowls, heads has been called 23 times, and tails 22 times (hardly surprising), but the NFC has won the toss for 14 years straight. The odds of the latter are 16,000 to one, according to an Associated Press article published earlier in the season.