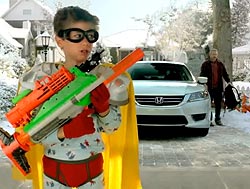 Honda is joining the year-end sales mix with “Happy Honda Days.” The effort, which has an oddly ’60's color-TV feel, features the odd parent or two, with an obstreperous mother saying the wrong things to her son at the wrong time, among other wackos. Each ad has someone thanking Honda for a great deal.

Sarah May Bates, RPA's assistant creative director on the account, concedes that this isn't exactly buying season, though it's critical for automakers for a couple of reasons: it pulls sales out of the hat to make year-end volume.

Automakers in recent years have moved away from hard-sell to humor, and Honda's no different. Bates points out that the Honda Days effort "pulls consumers in with a brighter, more fun approach than the screaming ‘buy it or die’ messaging,” she said. “These are humorous and relatable stories filled with colorful characters—mischievous kids, moocher roommates and hard-to-read fathers-in-law—that will hopefully be more entertaining for car shoppers this holiday season.”

Spots will air on appointment shows like “Modern Family,” “The Good Wife,” “How I Met Your Mother,” “The Office,” “X-Factor,” and on ESPN, TNT and TLC.

The company says there will also be Tier III elements that give dealers and, presumably, regional dealer groups access to customizable TV, print, radio, banners and social media assets.