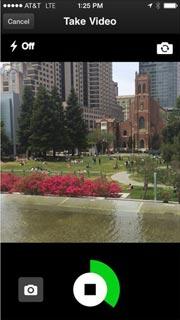 Ahead of its second-quarter earnings report this week, Yelp on Monday introduced the ability for all users to post short videos of restaurants and other venues via its mobile app.

The new feature allows people to upload three- to 12-second videos that help show off aspects of local businesses, such as ambiance, lighting, noise level and other features that aren’t easily captured by photos. The video capability -- which Business Insider in May reported was on the way -- is launching initially in the iPhone app, and soon to follow in the Android version.

Yelp had initially rolled out the service on a smaller scale to its “Elite” users in early July.

“These short videos are great for conveying the atmosphere of a business, which helps others anticipate their experience before stopping by. For instance, imagine scrolling through pics of delicious dishes at a new bistro, but not really being able to tell whether the ambience is more “date night” or “family friendly,” stated the company blog post today.

With more than 23,000 photos added per day through its mobile app alone, Yelp already offers plenty of images. That’s important, it says, because people spend 2.5 times longer on business pages with visuals than those without. This suggests that adding video could entice people to linger even longer as they watch uploaded clips.