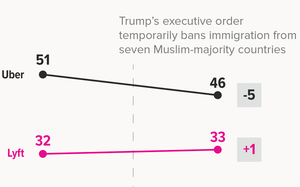 Fallout from the grassroots #DeleteUber social media campaign drove a significant drop in consumer sentiment for the ride-sharing platform, and a marginal boost for rival Lyft.

The campaign, which was initiated as part of a Uber’s tepid response to the Trump Administration’s refugee and immigrant bands, and Lyft’s proactive corporate social responsibility effort, sent Uber’s “net favorability” rating down to 46% for the period measured Jan. 21-27, according to a survey from Morning Consult. That was down from a net favorability of 51% prior to the effort.

During the same period, Lyft’s net favorability rose to 33% from 32%.

The #DeleteUber effort appeared to resonate more with younger demos, according to Morning Consult, which found young adults were “more encouraging” of Lyft’s activism.

“Forty-seven percent of people aged 18 to 29 say they view Lyft more favorably after taking a stand, as did 44% of people in the same age group about Uber,” the report found.
brand image, cause-related, corporate responsibility, politics, social media
Next story loading