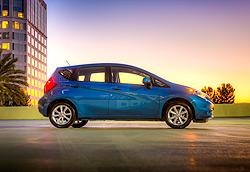 Nissan’s new Versa Note is a "A Door to More" in the automaker’s campaign for the  2014 model-year redesign of the five-door compact. The effort -- which is intended to appeal both to younger people and to older empty-nesters -- spotlights qualities unique to the segment, including a pretty huge interior space, and a variety of features brought in from the more premium end of the market.

Nissan started taking the message to the Web this month with a new microsite and a presence on Vine that urges people to create video clips about the car for the chance to get the video short into a national Versa spot.

At a San Diego press event presaging the car’s launch (actually, Versa is slowing rolling into dealerships now), Senior Marketing Manager Julie Lynch offered a sneak peek at the creative for the fall launch. A TV spot, which focuses a lot on Versa's practical advantages, uses the fifth door -- the hatch -- as a portal to different kinds of passions, so the viewer seems to go through the car from one world to another: a color run; a guy kite-surfing at Canon Beach; a group roughing it in a mountain cabin, where a guy nearly ignites himself trying to light coals; a rock band grabbing their gear from the car for a show. Voiceover is by Robert Downey, Jr.

The effort will include out-of-home ads that illustrate creativity with Peter Max-like splashes of color. One shows a painter hanging out the fifth door with a bloom of colors surging from his brush. Lynch said that between now and the fall launch, Nissan will have a robust digital plan to support the program. That includes third-party auto home page takeovers, she said, adding that NissanUSA.com includes a Versa microsite that eschews traditional static images and text with a video application that lets the user virtually drive the car.

The September launch includes heavy broadcast rotation on networks and cable -- and for the first time "in a long time," on late-night TV, per Lynch. There will also be a social program around Amazon, the particulars, although the details of this have not been revealed. She said there will also be a strong digital focus on Hispanic and African-American consumers.

Another vehicle getting a marketing push this year is the Juke, a vehicle that has been a strong seller in Europe, where compact cars and crossovers strongly dominate. In the U.S., where cars are much bigger, the Juke -- which has a polarizing design -- is still a low-volume car. Jon Brancheau, VP marketing, tells Marketing Daily that the push includes a redo of a European-market spot that uses a GPS motif, with the car being pulled through the streets by the red route ribbon on a navigation chart. He says the U.S. version of the ad will focus on performance. "We had to modify the voiceover so it focuses on the turbo-charge aspect of the vehicle," he says, adding that the car "appeals to a younger target looking for something to express who they are."

Juke, he says, is usually cross-shopped against Mini. And there's cross-consideration with Nissan's own Rogue crossover, with consumers coming into showrooms to look at the Juke but leaving with the Rogue. "We think it's great to see that switch."