Three media will comprise nearly $80 billion. Direct mail will take $38.5 billion. The report suggests that the high response rates of between 3% and 5%, along with a higher return on investment comparable to some digital media, makes this media the most appealing to advertisers.

Local TV, at $10.8 billion, will become more appealing in 2018  -- based on revenue growth from local mobile video -- which will rise to more than $1 billion, and local online video that will increase to more than $2 billion.

Overall, digital media will take 35.3% of the revenue, with traditional media at 64.7%. BIA/Kelsey defines local advertising as all advertising platforms that provide access to local audiences for national, regional and local marketers.

Mark Fratrik, chief economist and SVP at BIA/Kelsey, attributed the 5.2% growth rate from this year to next to a strong economy and the expectation of highly competitive statewide political races in 2018. He expects local advertising revenue to grow more in the next five years than the industry has seen in recent times.

The forecast also projects significant ad spending in native social advertising next year due to its ability to target and reach local consumers. Social media ad revenues from mobile, excluding tablets, now represent about 71% of total social ad spending and will grow to nearly 80% by 2022 as more users shift away from desktops. 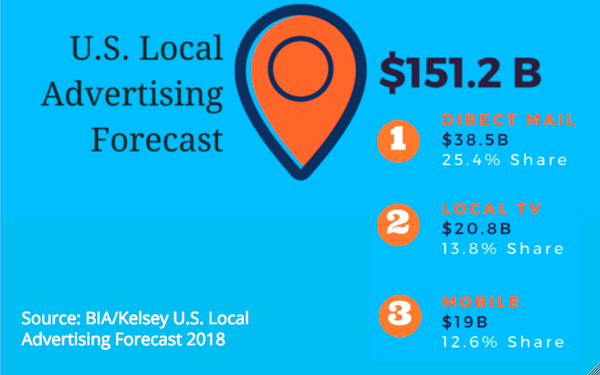