Do Consumers Trust Media -- And Will They Cross Party Lines? 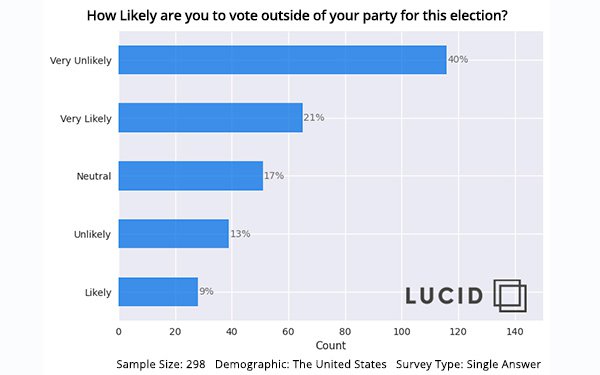 Trying to determine what voters think in a presidential election year should be a little easier this time around with advancements made in the past four years around sentiment analysis, artificial intelligence, and number-crunching technology. Still, it's not a perfect science.

To get a sense of voter sentiment about the election, Lucid recently tapped its global audience database to put together a survey. A few notable findings summarize the sentiment of those participating in the surveys.

Data from the small sample size of U.S. voters participating in Lucid’s survey -- about 300 -- found that 57% have cast an early vote for the election, and 71% feel optimistic about the outcome of the election, although the data doesn’t suggest why.

The most interesting data from the survey examines voter preference and how likely those participating are to vote outside their registered party for this election.

Some 90% said they have enough resources to make their voting decision. Most people get their news from traditional media sources. About 57% cited news outlets, while 29% cited social media, 8% cited other sources, and 6% said they are getting their information from family and friends.

And while most people are getting their news from traditional media, 52% think the information being distributed by the media outlets about the election is inaccurate. This may be contributing to a high anxiety level about the election.

About 76% of those participating in the survey said they feel anxious about the outcome, and 78% said they think the outcome of the election will impact the recovery efforts around the COVID-19 pandemic.