Partners Onboard For 'Wizard Of Oz' Anniversary 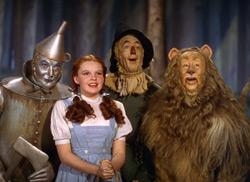 If you’re not aware that 2013 marks the 75th anniversary of the original “Wizard of Oz” film, you soon will be.

The effort will promote a theatrical re-release of the film in 300 IMAX theaters across the country in September and a limited edition five-disc Blu-ray set in October.

“Warner Home Video distributes over 6,800 theatrical titles, but only a select few have anywhere near the same broad appeal, proven sales success, and legendary status of ‘The Wizard of Oz,’” Thomas Lucas, vice president of marketing, theatrical catalog, tells Marketing Daily, in response to e-mailed question. “Without oversimplifying the challenge, the truth is we had more requests from brands wanting to tie-in with ‘The Wizard of Oz’ than we could accommodate. Our mandate was to select the best brands from each category, and offer the right fit for all partners.”

In perhaps the highest-profile initiative, McDonald's will feature limited-edition “Wizard of Oz” toys in Happy Meals in the U.S. and Canada from Sept. 20 to Oct. 10. Featured among the toys: Dorothy, the Scarecrow, the Wicked Witch of the West, the Tin Man, Glinda the Good Witch and the Cowardly Lion. Each figurine comes with a “Yellow Brick Road” base that interconnects with all of the other bases for a full display. Happy Meal boxes will also be adorned with movie quotes and imagery.

The film's imagery will also be used in public service advertising from the National Highway Safety Administration and the Ad Council, focusing on child passenger safety.

Amtrak, meanwhile, will display “Wizard of Oz” imagery in stations and on trains from November through December, promoting a Wizard-themed adventure sweepstakes online and in social media.

In supermarkets, Gourmet Trading Company, the leading distributor of fresh asparagus in North America, will promote the film's re-release with hangtags on vegetable bunches, and the Langer Juice Company will on-pack commemorative offers on its juices, supported by interactive media promotions.

In other programming, contestants on Food Network’s “Cupcake Wars” will be tasked with an Oz-themed competition on the Sept. 28 episode, and Oz-themed products will be hawked through QVC beginning in September.

All of the promotions will culminate with a giant hot-air balloon and balloon heads of “The Wizard of Oz” characters during the Macy’s Thanksgiving Day Parade.

“The 75th Anniversary marks a significant milestone for any 20th century entertainment brand that can still claim to be a leader in pop culture,” Thomas says.