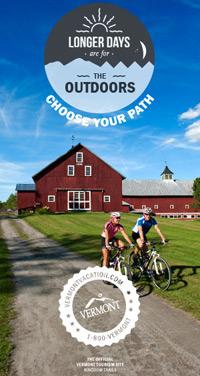 With more people set to hit the road this summer than in the last decade, New England states are clamoring for a bigger share of the seasonal travel market. The stronger economy, as well as cheaper gas prices, are fueling states’ hopes that people will travel further, stay longer and spend more.

Vermont, for example, is changing its tactics this year, expanding beyond its usual nearby hunting grounds. “We usually focus on the drive markets,” says Steven Cook, deputy commissioner for the Vermont Department of Tourism and Marketing, “but this year, we wanted to increase the length of stay to five or six days, and add midweek guests. So we put a significant portion of our effort into domestic markets that are within a three- to four-hour flight radius.” That means that while it’s still reaching out to Boston and New York, whose residents flock to Vermont anyway, its new ads are also targeting Baltimore, Atlanta, and Washington, D.C. “We’re really trying to drive that airline travel.”

Connecticut is zeroing in on closer-to-home targets, spending $2.3 million this summer to encourage nearby Gothamites, Bostonians and Philadelphians to come have a sleepover in the Nutmeg State. Continuing its “still revolutionary” theme, this year’s ads push “Revolutionary Thoughts,” and pair diverse experiences from 130 locations, such as relaxing and active, historic and contemporary, cultural and nature-oriented. Adams & Knight in Avon, Conn. is the agency.

And while Maine is continuing its “Discover your Maine thing” campaign from previous years with TV, print, digital and social media, new marketing research has led it to target three psychographic groups that offer the best potential, and is tweaking its messaging as a result. Reaching out to segments it defines as either “balanced achievers,” “genuine originals” or “social sophisticates,” this year’s ads ask consumers to picture themselves as part of the story. Media placement is focusing on Boston, suburban New York, Hartford, Conn., Philadelphia, Washington, D.C., Charlotte, N.C., and Canadian markets.