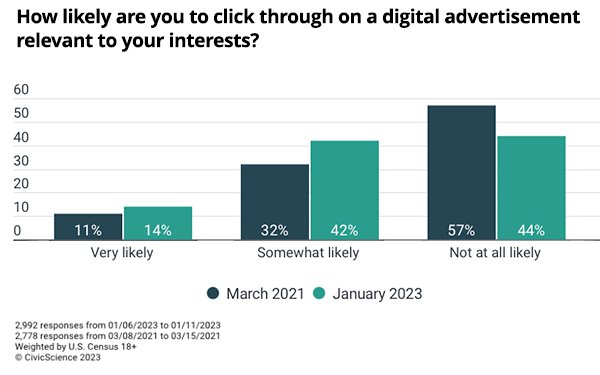 While Apple pretty much "destroyed" user tracking on iOS, according to platforms like Facebook, consumers are reporting otherwise. The number of U.S. adults who say digital ads they see are at least somewhat relevant to them has climbed from 30% to 41% during the past two years.

"However, note that only 6% of Americans think the ads they see are 'very relevant," CivicScience writes in a report. "Two takeaways from all this: 1) We don’t need to spy on people to serve them good ads; 2) There’s still huge room for improvement."

Contrast that with adults under 35, who are five to six times more likely to see ads that are "very relevant."

Young adults are more tuned in with the ads they see, whereas older consumers are largely not.

Advertising relevance also is growing among social media users. The question, however, becomes whether targeted digital ads are "becoming more relevant to younger adults, or is the increase in relevance (and clicks) being driven by changes in usage of ad-based digital media?” according to the post.

Overall, social media users are more than twice as likely as non-users to say the majority of digital ads they see are relevant to them.

A look at top social-media platforms shows that ads today are most relevant to TikTok users, followed by Twitter, Instagram, Facebook, and YouTube. Those who say ads are at least “somewhat relevant” have grown across all platform users since March 2022.

With advertising relevance growing, clicks are also up this year. The number of those who say they are likely to click on a digital ad that is relevant to their interests has increased since March 2021, from 43% to 56%.