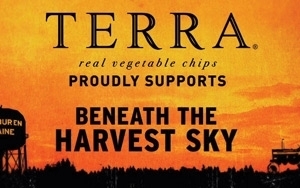 Terra Chips is realizing significant positive exposure with Millennials and other key audiences from a marketing partnership with the makers of an indie film, according to Jared Simon, director of marketing for the brand's parent, Hain Celestial Snacks.

As Marketing Dailyreported last September, prior to the shooting of "Beneath the Harvest Sky" by filmmakers Aron Gaudet and Gita Pullapilly, Terra Chips agreed to provide marketing support for the film, mostly in the form of in-kind and cross-promotions.

The film tells a coming-of-age story set in Van Buren, Maine, on a family farm (owned by the LaJoie family) that's the primary supplier for the blue potatoes used in Terra Blues Potato Chips. The brand is visible once in the film, when one of its trucks picks up a load of potatoes at the farm, but had no influence in the creative decisions or process.

Through that deal, the movie made its U.S. debut with three showings during the Tribeca Film Festival in New York City (which ran April 16-27).  Following preview engagements in theaters in eight Maine locations starting April 25, it's scheduled for engagements in 10 more locations, including New York, Boston and other Northeastern locations, Chicago and Santa Fe, N.M., through the end of June.

As of April 15, the film is also available in the U.S. and Canada on cable/telco and satellite video-on-demand and digital platforms (including  Amazon Instant, iTunes, Google Play and others). Thanks in part to its presence at the Tribeca Film Festival, "Beneath the Harvest Sky" received top billing in the new releases areas of many of these outlets, reports Hain's Simon.

Each viewing translates to associated positive exposure for Terra Chips. And the brand has amplified that in a variety of ways.

In addition to product sampling opportunities at the Tribeca (and Toronto) festivals, leading up to the film's U.S. debut, Terra Chips used its Facebook page — and stickers on tens of thousands of it bags distributed in the Northeast — to promote a sweepstakes with a prize of a trip for two to New York to attend the film's premiere at the Tribeca festival. The sweeps generated more than 350,000 online impressions and thousands of entries, reports Simon.

Terra Chips also featured two short videos shot for the brand during the film's video on its Facebook page. One, introduced by Simon, tells the real-life story of the LaJoie family and how their farm produces most of the potatoes for Terra Chips. First posted on Feb. 24, that video had drawn more than 37,000 views and nearly 878,000 impressions as of April 18. A second video featuring scenes and behind-the-scenes footage from the making of the film, first posted on April 16, had already drawn nearly 1,000 views and 12,000 impressions as of April 18, according to the brand.

Terra Chips also leveraged its long relationship with JetBlue as the airline's official snack, to strike a deal in which a longer (four-minute) version of the family-farm video is being shown on JetBlue, including in a reel featured on JetBlue's PlusTV channel, from March through early May. (The video includes a promotion of the film's availability on VOD and digital platforms.)

In addition, in partnership with Amazon, for about two months during the film's initial release period, Terra Chips' packages distributed on JetBlue are featuring a promotional message for the film and its availability on Amazon Instant.

All in all, Terra Chips' tie-ins with the film have proved a "really efficient vehicle for driving engagement" with young adults in particular, says Simon, who adds that the innovative initiative has also won points with retailers looking to attract the same audience with growing assortments of natural foods.

More cross-promotions (possibly including sampling at more screenings) may be implemented as the film continues its theatrical and VOD/digital platforms release, he says.