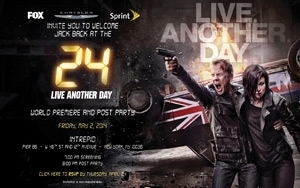 Chrysler is hitting the deck Friday night, literally. The automaker is to be official sponsor of the sixth season of "24: Live Another Day."

The show's premiere on Friday night is to be held at the Air and Space Museum on the decommissioned Intrepid aircraft carrier in New York, a red-carpet affair, where the the premiere was screened. The show stars Kiefer Sutherland as an agent perennially fighting terrorism. The new episode was shot in London and has Sutherland's character, Jack Bauer, going mano a mano with another world-class psycho.

Chrysler will do in-show integration; media exclusivity in key episodes; season-long placement of the redesigned 2015 Chrysler 200 and customized digital content and experiences. The automaker is also doing social media activations, co-branded marketing, and co-sponsorship of the event on the Intrepid.

Andy Love, Head of Chrysler 200 Brand Marketing tells Marketing Daily that “24: Live Another Day” is the only major TV-property integration for Chrysler 200.

He says that after requesting proposals from media partners last year on the 200 launch Fox came back with the right property. "It’s fast-paced; addictive; it has a massive audience with a high average income; and it’s coming back after having been off the air," he says. "And the show itself is very technical, with lots of performance." Chrysler 200, according to Love, will have product integration in the show in various episodes, and a major, “starring” role in one of them. He says Chrysler will use the relationship not only to show off the car’s new look, but also to show off the interior appointments, amenities and such technology as the UConnect infotainment platform. “It’s a nice alignment for us, partly because in the midsize sector performance is getting more important; car companies are selling performance versions and consumers want sportier packages. And technology and performance are hallmarks of the show:  every time someone gets in a car there’s going to be exciting driving.”

He says awareness is the key for the deal. “We haven’t been out there like Camry and Accord driving awareness and that’s paramount for us. And partnering with a program that’s naturally cool gives you some credibility, and it lests us showcase the car.”

The two-hour premiere of the Fox program is May 5 prime time. Sprint is also back, and will do a campaign around the sponsorship, which the company says will include in-show integrations with media exclusivity; season-long placement of Sprint phones in the show; and what the company says is a customized digital content experience with a “Connect and Complete” theme where fans can use service to complete missions on Fox.com, thereby getting exclusive 24-related content.

The company, which has been with the show for five seasons with such elements as mobile content "mobisodes" says it is also activating against the Intrepid event.

The Chrysler 200 is a critical car for the automaker, a division of Chrysler Group LLC, which is now part of a new corporate organization called FCA (Fiat Chrysler Automobiles.) The importance of the car for the division cannot be overstated: competing in a region of the market -- midsize cars -- whose tooth-and-nail market share battles kind of resemble Jack Bauer’s work life, the car hasn’t ever had a dedicated and total redesign to speak of since the first-generation car in 2010.