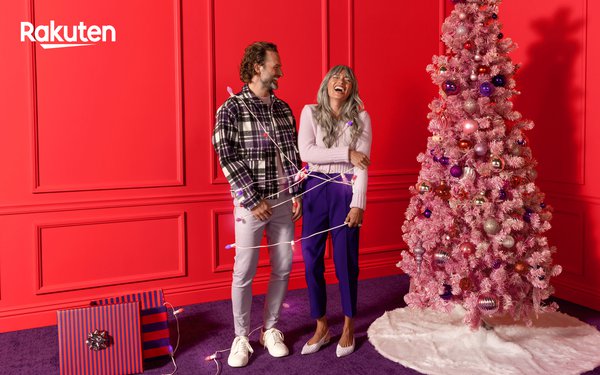 Rakuten Rewards recently overhauled its visual identity, bringing to life an entirely new personality, voice and tone for the brand.

Early in November, the company introduced a holiday campaign, 12 Days of ChaChing, playing off the 12 Days of Christmas. This is the latest among several strategic moves to strengthen and grow Rakuten’s brand during the past two years.

“We bring the ChaChing,” said Victoria McRae, vice president of brand and creative at Rakuten Rewards. “It’s about getting ChaChing on your thing, like more cash in your pocket or cash back.”

Rakuten partnered with COLLINS -- which McRae worked with while at Credit Karma -- to develop the framework of this new identity, and the company’s in-house creative team brought the campaign to life.

With the use of whimsical patterns and fun illustrations, the new creative was developed to tap into that feeling of discovery and optimism that consumers get from rewarding shopping experiences. Ocean Media is the media buyer.

“We’re also buying heavily in podcasts,” she said. “It’s really fun, because we have a lot of people telling the story of Rakuten in their own words.”

The look-and-feel has been updated across media, from email marketing collateral, to search, browser extension, Rakuten app, and more. Aside from the updated visuals, this new identity signifies a massive shift in personality and tone, playful and happy, for the brand.

Rakuten, which boasts 15 million members, has expanded its customer and merchant base to include new industries like subscription services, and continues to attract a growing number of luxury buyers. To date, its members have earned $3.5 billion in cash back.

“We want the campaign to reflect our new personality,” she said.

Focusing on that change appears to have upped its use by consumers, introducing them to a useful and creative platform.

Rakuten Rewards has seen a 7.5% increase in use for trips year-over-year, so far in Q4 2021, excluding travel and Amazon.

Getting ChaChing on that thing, earning money per purchase, will continue as a theme throughout the coming year, McRae said.