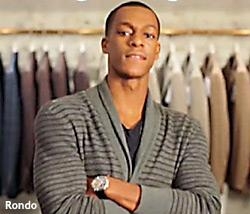 Basketball players these days are about more than just the hardwood. American Express and the NBA are out to showcase several players’ outside interests in a new digital destination.

Called “Off the Court,” the new online experience will feature live video chats with NBA players, coaches and former players, and a multi-part video series that shows off the players’ passions outside the sport. The first of these videos features NBA All-Star Rajon Rondo and his love of fashion. In a three-minute video, Rondo speaks about how an internship at GQ Magazine in 2011 opened his eyes to the world of fashion.

“When I first got to the NBA ... I was dressing big back then. Big suits, everything was big, I don’t know why I was dressing so big,” he says. “[The internship] was a different experience. I got a lot of experience ... it just picked up from there.” Other videos will feature stars such as Chris Bosh and Joakim Noah.

“We have a rich history of enabling the passions of our card members, whether it's travel, music or fashion, and now we want to give all basketball fans a chance to celebrate and explore these shared passions with some of the NBA players they love,” David Eisenberg, senior manager of sports and entertainment marketing at American Express, tells Marketing Daily.

“This first-of-its-kind digital destination allows us to connect fans with some of their favorite NBA players and teams, through unique vignettes, opportunities to chat live with players and engage in a special digital contest. As a result, we hope to enhance fans' passion for basketball and get them closer to the game.”

In addition to the videos, the site will include live video chats with NBA Players, legends and coaches. Hosted by former player Rick Fox, the chats will allow fans to submit their own questions in real-time via social media. Other features of the partnership will include fan access to special offers, merchandise and tickets. American Express will also give fans the opportunity to showcase their own off-the-court passions, with the opportunity to win prizes such as premium game tickets and meet-and-greets with NBA players.

American Express, which was an NBA partner from 1995-2005 and re-partnered with the league in 2010, will promote the new “Off the Court” site, with a “multi-channel communications approach” that includes social, media, public relations and digital promotions, Eisenberg says.