When the history of audience measurement eventually gets written, 2022 will be remembered as the year when Madison Avenue officially scrapped long-standing methods of industry self-regulation in favor of ones based on certifications by its suppliers.

It will also be remembered as the year when the world’s biggest advertisers and agencies finally lost their minds and agreed to do business on the basis of their suppliers grading their own homework -- because, you know, it’s just easier that way.

If you look back at some long-term and recent events, you probably could have seen the inflection point coming.

Long-term, the ad industry has increasingly accepted doing business on the basis of self-reported data processed by third-party suppliers that have been “certified” by the big digital platforms they spend billions of dollars on: Google/YouTube, Facebook, Amazon, etc.

The ad industry has long groused about that imbalance, but has begrudgingly accepted it because that’s how “walled gardens” do business -- doling out metrics and performance data from their own black boxes -- because that was the only way they could buy them.

Now the big legacy broadcast media companies want to do the same, leaning into and repositioning themselves for their digital future, and taking a page out of the platform’s playbook.

“Today, NBCU continues the next step in the journey to provide marketers optionality when it comes to measuring the value of their media investments reflecting a modern TV landscape, announcing their first certified measurement partner, iSpot.tv as an alternative currency,” NBC Universal said in a press release issued last month, which singled out Publicis Media as the first agency holding company agreeing to test the new ratings this quarter, just in time for NBCU’s Winter Olympics coverage.

That release followed weeks of off-the-record briefings with trade reporters spinning them on how NBCU had been carefully developing a handful of alternative currency suppliers and that it planned to utilize its Olympics ad deals as a means of generating trial and awareness around them.

The use of the Olympics makes sense, because NBCU has had a long history of using the Games as a means of introducing alternative currencies -- notably its “TAMI,” or “total audience measurement index” that it doled out with its coverage of the 2008 Summer Games to show how much bigger its audience was than Nielsen’s ratings estimated.

It was not the first time big network research and sales organizations have pushed alternative currencies on the ad industry.

For years, ABC and ESPN had spent millions producing alternative measurement of out-of-home audiences and tried to convince Madison Avenue to buy on the basis of it, but most advertisers and agencies resisted back then, arguing that whatever incremental audience could be measured via out-of-home tracking was already baked into the underlying currency of the Nielsen ratings they actually did business on.

Fast forward a couple of decades and the supply-side appears to have won, mainly because the demand-side -- or at least the big ad agencies representing it -- have simply caved in, citing the fact that digital has always done business on the basis of their own certified chain of third-party data and metrics suppliers, so why shouldn’t TV?

I’ve been hearing this sentiment for a while now, mostly from the digerati side of the house, which has been gradually assuming control of the overall media-buying enterprise, but it was stated clearly, emphatically and empirically during a prep call I did last week for a panel I’m moderating midday Thursday for CIMM (Coalition for Innovative Media Measurement).

The panel, which is part of CIMM’s annual Converged TV Measurement & Data Summit, is entitled, “Buyers & Sellers Debate One Currency vs. Many,” but if you ask me, it won’t be much of a debate, just a lot of kumbayaing about why it’s time to get over it, and just move one.

Specifically, the panelists echoed a growing sentiment I’ve been hearing throughout the industry that the industry’s self-regulatory approach to audience measurement -- especially the notion that ratings services should be audited and accredited by the Media Rating Council (MRC) -- is quaint at best, and far too slow-moving for today’s real-time digital world.

There are a variety of other “perfect storm” factors contributing to why 2022 is the year media audience measurement will reach its digital tipping point, including the fact that none of the services of its de facto currency -- Nielsen -- are currently even accredited by the MRC.

Add to that the fact that Nielsen itself will effectively zero-base its own currency this year by introducing a new, presumably digital-friendly, “cross-measurement” service dubbed Nielsen One.

I sense some other factors in the mix too, including some personality ones, which I won’t dwell on in this column today, which is mainly being written to make the point that 2022 has effectively become a game of jump ball, and that at least one big TV-centric organization, NBCU, is using it to push through new alternative currencies, even as the rest of the industry -- both buy- and sell-side -- talk about using “shadow currencies” to do business.

The truth is that the concept of alternative currencies is not new, because what defines a “currency” is not whether it was audited, accredited, certified, or any other word you want to apply to make it seem sanctified.

What defines a currency is that two sides agree to do business on the basis of it.

Of course there are actual laws -- not just industry self-regulatory practices, that could come into play here, including the Sarbanes-Oxley Act, which requires publicly traded companies like agency holding companies and big media suppliers to disclose potential business risks they are taking with their shareholders.

And then there is the U.S. Constitution, which as part of Article 1, establishes that the “weights and measures” used by our industries are a “direct concern of the federal government.” I was just reading that as part of a review of the Harris Committee report published by Congress following its original investigation of broadcast ratings in the 1960s that led to the creation of the MRC (formerly Broadcast Rating Council), and a self-regulatory state that has existed for more than half a century.

I know Congress has a lot on its plate these days, and that is more likely to take a direct concern in the weights and measures produced by the algorithms of big digital platforms -- especially social media -- than it is in revisiting the regulation of the converged TV measurement and analytics supply chain.

But it’s pretty clear from my panel prep call that the industry already has abandoned its long-standing approach to self-regulation in favor of speed and pragmatism. And I, for one, consider that certifiable. 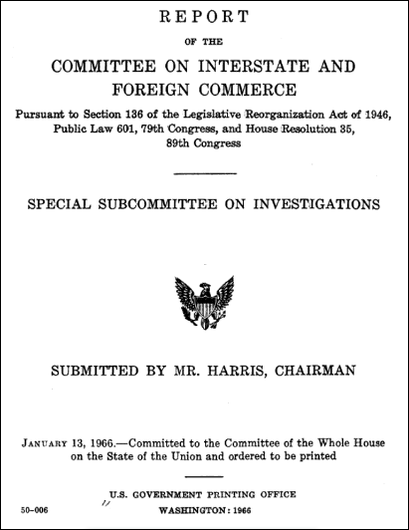